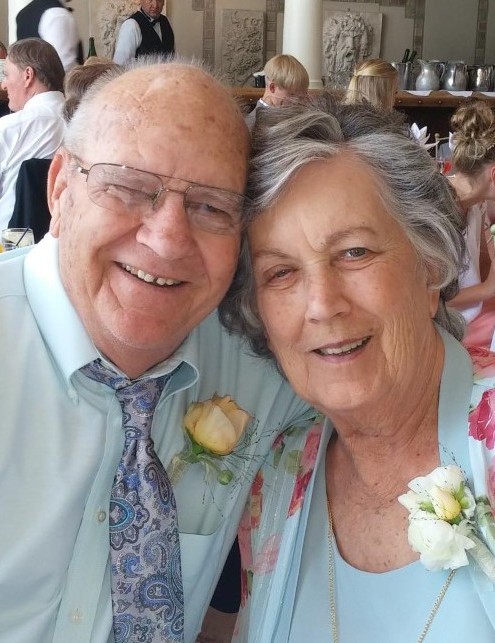 Ralph Glen Ewald was born in Mission, Texas on January 23, 1932, to Russell and

Dorotha Ewald.  He was the fourth of seven children; Harold, Doris, Lee, Ralph, Mary, Laura, and Kenneth.  He grew up between Mission and McAllen, near the Rio Grande River, until the family moved to Kingsbury when he was in Junior High School.  Ralph’s father owned and operated a service station and welding shop; and his mother, a

homemaker, sold ice from and ice house on the property.  Ralph went to Dowdy High School, where he played basketball and football, later telling his grandsons, “With

leather helmets and all.”  He graduated from high school in May 1951.  After high school, he joined the Navy and served aboard the U.S.S. Renville as a radio operator during the Korean War.

Norma was an only child for twelve years until her brother, Jim VanderSyde came along.  She was also raised with several step brothers and sisters.  Norma was raised on a farm in Hollandale, Minnesota, a Dutch community where she learned many Dutch

sayings.  She graduated from Albert Lee High School and eventually moved to California with her mother and brother.

After serving for four years in the Navy (1951 to 1955), Ralph was introduced to Norma on a blind date.  They married on the 2nd of October, 1955, in Anaheim, California.  The newlyweds set up residence in Santa Ana, California.  Ralph worked for Pacific

America as a Teller.  Ralph was later hired by Western Electric Telephone Company where he spent the rest of his career.  They later became AT&T.  Ralph and Norma had three daughters; Sharon, Glenda, and Lauri and supported them in all sorts of

activities.  Ralph was the Chief of the Indian Maidens, where he enjoyed donning the headdress.  Ralph was also the Umpire-in-Chief and Norma a Team Mom, for the Bobby Sox Softball league, where all three daughters played.  Norma, was a stay at home

mother until the three girls entered school.  She worked for Bank of America as a Teller for the rest of her career.  In 1989, Ralph retired as a supervisor from AT&T, where he made several lifelong friends – who fondly referred to him as “Tex.”

Once all three girls were married, Ralph and Norma sold their home in Orange and

travelled the United States.  Over the course of eleven years, they made many stops to visit family and friends, and enjoyed an abundance of sight-seeing.  In 1998, Ralph and Norma settled in Boise, Idaho, near their youngest daughter, Lauri, and her

family.  Ralph and Norma welcomed 8 grandchildren into their lives; Grant, Danae, Derek, Spencer, Jessica, Sean, Nicole, and Jake.  In Boise, Ralph and Norma joined the Telecom Pioneer Group, where they made new friends and enjoyed volunteering and participating in many activities and functions.  They attended Foothills Christian Church in Boise, where Ralph enjoyed a part-time job maintaining the church facilities. While residing in Boise they  became great-grandparents of seven.

Ralph and Norma both had a great sense of humor, loved to laugh, tease and joke.  They were not shy, and would talk to anyone about anything.  Ralph’s nieces and nephews said that Ralph was a big draw to family reunions in Texas, as more of them would come “if Uncle Ralph was attending.”   Ralph loved traveling, camping, nature, the outdoors, and gardening – as evidenced by the delicious tomatoes he grew every summer.  Norma put her sewing skills to work making wonderful costumes for the grandkids and one

Christmas transforming all of them into reindeer, bells and all.  Her fun gift

presentations always left the grandchildren guessing what was in the box.  Norma always put her family first coming to care for new babies’ arrivals, helping to pack up a house for a move, or sharing in a birthday celebration.  Above all, Ralph and Norma loved their family, God and their country.

A joint committal service will be held at 2:00 pm, on Friday, March 29, 2019 at the Idaho State Veterans Cemetery in Boise.