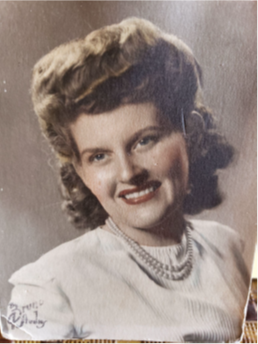 Etta Maud (Maudie) Garretson, age 98, died July 20, 2021 at home in Emmett,
Idaho. She was surrounded by family and loved ones.

Maudie is survived by her daughters: Cynthia Nichols, Kathleen Taylor, and Lori
Eisinger. She also leaves behind nine grandchildren: Shane, Jake, and Zach Nichols;
Joe and Heath Taylor and McKenzie Taylor-Bartels; Ben Garretson, Tim and Didi
Eisinger. In addition, she was blessed with twenty-two great-grandchildren.
Maudie was born December 11, 1922 to Ivy and Lloyd Schreffler near Edgar,
Nebraska. She was the oldest of six children, four of whom survive her: Ken and
Lewis Shreffler, Jane Raynor, and Ivalie Wood.

When Maudie was 16, she moved with her family from Nebraska to a farm near
Caldwell, Idaho. She graduated from Caldwell High School in 1941. She met Joe
Coon at a church function and they were married in March of 1942 in Cle Elum,
Washington. During the war they both worked in the Seattle shipyards, until Joe
was deployed to the Pacific theater.

Shortly after Joe’s return from the war front, Maudie gave birth to Cynthia, and a
year and a half later they moved to Illinois so Joe could attend Bible College.
Maudie and Joe moved back to Boise where daughter Kathleen was born in 1950.
In 1954 Joe died as a result of an accident at work. Maudie and her daughters
stayed in Boise.

In 1956, Maudie met Roger Garretson at church where they were both in the
choir. After a courtship that included homemade meals and Mario Lanza, they
were married September 1,1956, and Lori was born the next year.

After their marriage, Maudie started her career as an Educational Secretary at
Lincoln School in Boise and ended her career as an Educational Secretary working
in the School of Education at B.S.U. She was a very active member of the IAEOP
and eventually served as the president for the Idaho Association of Educational
Office Professionals. Maudie, who started singing before audiences as a child, was
also a member of a female choral group based in Boise, called The Madrigals. She
participated in their community concerts for several years. Maudie and Roger
were very active in their church, and Maudie served for a time as the head of
senior ministries at Valley Shepherd Church of the Nazarene. Maudie was always
looking for experiences to expand her knowledge and talents. She was generous
and supportive when it came to doing the same for her children and
grandchildren.

Maudie will be greatly missed but we are secure in the knowledge that she is in
the presence of the Lord.

A joint memorial will be held for Maudie and her husband Roger, who preceded
her in death, on September 5th, 2021 at Valley Shepherd Church of the Nazarene,
150 West Maestra St., Meridian, Idaho. Finger foods will be served at 12:30 P.M.,
memorial service to follow.

A joint memorial will be held for Maudie and her husband Roger, who preceded
her in death, on September 5th, 2021 at Valley Shepherd Church of the Nazarene,
150 West Maestra St., Meridian, Idaho. Finger foods will be served at 12:30 P.M.,
memorial service to follow.