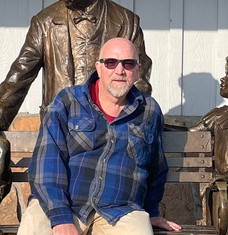 Willis Rodger Ballard II (Bill) passed away February 18, 2022 at 3:30 a.m. of liver cancer at the age of 59. He was the son of Willis Roger Ballard and Judith C. Cole.  He was born on Halloween, October 31, 1962 at the Roseville Hospital in California and welcomed by his big sister Charlene.  He always loved Halloween and had many costume parties.

Bill started going to work with his dad when he was a baby and was a working electrician by the time he was 12. He spent his younger years in California and Reno. When he was in the fifth grade the family moved to Midvale, ID where he was to meet many of his life-long friends. He had many fond memories of his life in Midvale, his friends and his horse, Lighting. He was happiest when he was in Midvale with his best friends Ted and Jodie Dogget. Their children, little Jake and Kelsey were his children too.

When he was in his teens, the family moved to Boise and he graduated from Meridian High School.  Sometime after graduation, Bill went to work for Idaho Timber.  While partying with his friends, he met Allyson and the two instantly bonded and were never separated. Their first son, Troy, was born in late 1985. Shortly afterwards, the family moved to San Jose, California, where Bill began working for his dad as an electrician.

Jake was born in Hayward, CA in 1988. Both Bill and Allyson missed the Boise lifestyle and their friends. After 6 years, they packed up and moved back to Boise. When Bill went job hunting, he met Bob Glenn and went to work for him.  After a few years he became a partner in the firm of Glenn Electric.  The company thrived. Troy and Jake followed in their dad’s footsteps and became electricians as well.

Allyson and Bill traveled extensively throughout their years of marriage. Every trip they took together was an adventure. Family trips were a regular event. Whether it be trips to Mexico or weekend getaways in the woods he was always thrilled to be traveling. He loved to go camping, fishing and hunting. He instilled his love of the outdoors in his boys. Bill’s beloved wife, Allyson, passed away at the age of 59 on March 31, 2019. Bill grieved the loss of his partner every day since.

He is survived by his sons Troy A. Ballard, his fiancé Dale Hartwell, his grandson Braiden Ballard and Jacob W. Ballard (Jake), his mother Judith C Cole (Judy), his nephew Jeremy A Woods, his wife Christine and sons Kaleb and Tanner Woods.

He was preceded in death by his father Willis Rodger Ballard, his sisters Charlene A. Ballard Woods and Pauline R Ballard (infant) and step-father Will R Cole (Bill) and his half-brothers Matt Ballard and Mark Ballard.

The family would like to thank all of the people from Midvale and Boise for welcoming Bill into their lives, their homes and their hearts. He loved and treasured each and every one of you. You know who you are and so do we. Bill was an amazing father, a loving son, a devoted husband, a true friend, and a truly good man. While we must grieve that Bill was taken from us too soon, please take comfort that Bill has joined Allyson, the love of his life, and that he is no longer in pain.