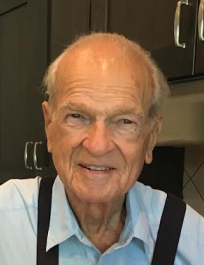 William “Frank” Freeman, 93, passed away at home on May 28, 2019, due to natural causes. He was born April 21, 1926 in Fort Benjamin Harrison, Indiana to Hal Way and Elva Kathleen Freeman. His father was a captain in the Army and was stationed with his family in Indiana, Michigan, Panama and eventually settled in Boise, where Frank attended Boise High School. He enlisted in the Army in 1944 during World War II and attended basic training at Camp Roberts, CA. In 1945, he went to Mule Skinner School (animal handler-he didn’t actually skin the mules!) at Fort Riley, KS, and was stationed at Fort Ord, CA until being deployed on a boat carrying mules to India. Although the war officially ended while the boat was still enroute, they proceeded to India where he was stationed for a year during the post-war stabilization.
After returning home to Boise, he attended Boise Junior College. In 1947 he married LaVi Alder and they had a daughter, Julia Ann. They later divorced. He was accepted into the Air Academy as a cadet and attended for a time before returning to Boise. In 1950, he married Elizabeth “Liz” Ourada King and adopted her two daughters, Rufina Marie and Karon. He then went to radio training school in Chicago. After returning to Boise he and Liz had three more daughters, Shirley, Kathy Sue and Debbie.
Frank worked at Horlan’s Plumbing Supply for 30 years until his retirement in 1988, after which he and Liz had time to enjoy traveling and attending their grandchildren’s sporting events. He loved spending summers swimming at Lowell Pool when his daughters were young, and later with his grandchildren and great grandchildren. He also enjoyed traveling to national parks with his family. He was always ready for a game of tennis whenever possible, but his true passion was motorcycling. He will be remembered for his sharp mind, working crossword puzzles until his last days. He also had a great sense of humor and quick wit.
Frank was preceded in death by his parents, his brother Hal Jr. “Buddy” Freeman, sisters Camilla Holste and Wanda Salek; his wife Elizabeth, daughter Karon Eberhart, and great-grandson Hayden.
Frank is survived by his sister, Bonnie Hall; daughters Rufina Marie Leonard (Ritch Orcutt), Julia Woolum (Kevin), Shirley Martindale (Russ), Kathy Sue Freeman, Debbie Freeman, and “daughter” Sandee Rhodenbaugh (John). Also survived by 12 grandchildren, 15 great-grandchildren, and two great-great granddaughters. He will be greatly missed by all his family who loved him for the wonderful, loving person he was.
Special thanks to Rhea, Merrill, Daniella, Pat and Jeremy with St. Luke’s Hospice, and wonderful neighbors Clela and Roger who brightened his days and were a huge help to his family during the past six months.
Funeral services will be held at 1:00 p.m. on Friday, June 7, 2019, at Bowman Funeral Home, 10254 W. Carlton Bay (just off State St.), Garden City, Idaho. Burial will be at Dry Creek Cemetery, 9600 Hill Rd., Boise., reception to follow.