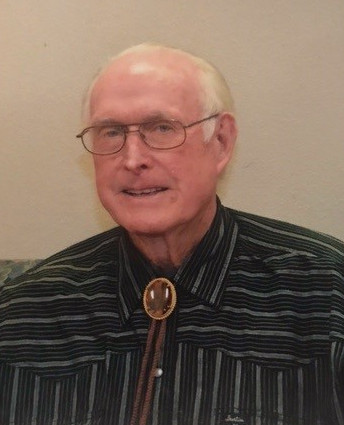 He went to the Kanza School all 8 grades. He had 3 Brothers and 5 Sisters. He was a 4-H member and raised registered sheep on a sheep ranch until he was 17, then he left home at that time.

He moved to Emmett, Idaho and worked with his brother at his Sawmill where he drove truck.

In 1954, at 22 years old he was in the army, and spent 18 months in Alaska. He worked in the motor pool at Fort Greely (ATS) Army Indoctrination school that taught them how to live in the cold. Upon being released he returned to Emmett.

He then met and married 20 year old Shirley Cantrall. They had a son, Greg and daughter, Robbin. In 2005, after 51 years they got a divorce. The kids were all grown and raised in Emmett.

He hauled logs and lumber for Ralph Miller at McGregor for 2 years.

In 1961, he owned his own truck and business. He still lived in Emmett and hauled logs for his brother, Buck who was 22 years old at the time.

At the age of 54, He built his own truck shop. In 1983 at age 62, He had 2 trucks that hauled shavings to LaGrande, Or. He oﬃcially retired, but worked for diﬀerent loggers till he was 81. He got a Belly Dump and hauled gravel. He also had a low boy trailer and hauled equipment to build the road to Ola.

In 1988 he bought his last truck, it was his last and most favorite truck and best of all it was New!

He enjoyed dancing at the Treasure Valley Eagles Singles in Boise and Nampa. He had many good friends and made some wonderful memories.

In May 2020 he moved into Graces Assisted Living in Caldwell, Idaho to be closer to his grand-daughter Kristin who took him to his appointments and looked after him since he could no longer drive.

The Family would like to express a huge thank you to Graces Assisted Living in Caldwell and All Care Hospice for all their help and care that they provided for Bill.