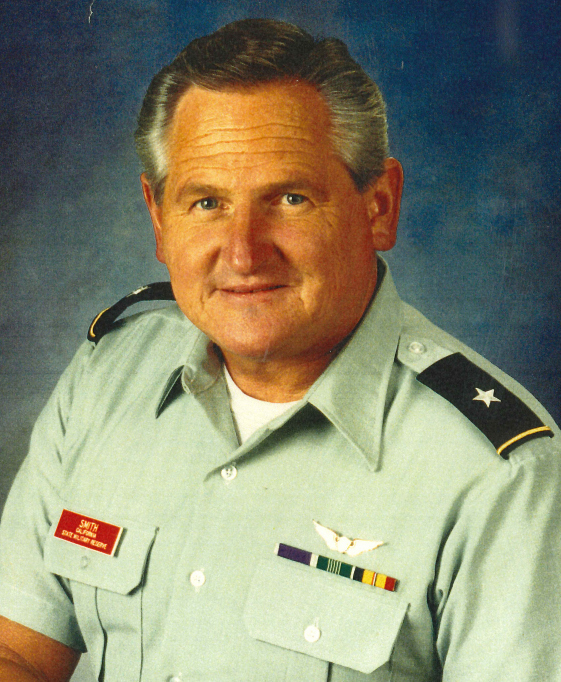 Walter “The General” Sepulveda Smith, 72, of Star, Idaho passed away Thursday, February 10, 2022, at St. Luke’s in Nampa. Walt was born November 14, 1949, to George and Joyce Smith in Van Nuys, California but moved to Sebastopol, California when he was a young child. He grew up in Sebastopol on what is fondly called Georgetown, a movie set memorabilia “ghost town” his father built on the ranch with him and his brothers.

Walt joined the Marines at 18 and served his country in the Vietnam War and was awarded a Purple Heart Medal. After he returned home, he joined the California State Police and was assigned to the personal security detail for Governor Ronald Reagan. Walt continued his military service in the California Army National Guard and graduated from Officer Candidate School in 1973. Walt served 30 years in the military and retired as Brigadier General from the California State Military Reserves in 1998.

Walt had an unwavering and lifelong love of flying and aircraft. His first job at 16 was as an aircraft fueler at the Sonoma County Airport for Manny’s Fuel Service. He flew air tankers for CAL FIRE (1969-70), graduated as Distinguished Graduate from the U.S. Army Rotary Wing Course (1975) and went on to fly helicopters for several years with the National Guard, and served as a Sonoma County Sheriff’s Deputy helicopter rescue pilot flying Angel II (1979-80).

In 1977, he joined the Federal Aviation Administration, and he would later return to the Sonoma County Airport as the Airport Manager. He held several positions in the FAA including Air Traffic Controller at BAY TRACON in Oakland all the way to the Y2K Risk Branch Manager for the National Headquarters in Washington D.C. in 1999. He served his final detail with the FAA as the Regional Airport Manager for the North Bay and San Francisco region in California and retired in 2007 after 30 years of service. He then continued as a Consulting Contractor with the Washington Consulting Group on international projects until 2016.

In Idaho, Walt served as the Chairman for the Veteran’s Day Parade and President of the Military Officer’s Association (MOAA) and was a member of several Veteran’s organizations including the VFW and other state and national Veteran’s affiliations. Walt lived a life of service to his country, his community, and his family. He was happy spending his days planting trees and landscaping his property wherever he lived. He loved to cruise around in his WWII Willy’s Jeep and visit the Veteran’s Cemetery via the backroads of Star and Eagle or garner his General’s WWII deuce and a half ton truck in American flags, load up his grandkids, and parade in local Fourth of July and Veteran’s Day Parades.

Walt’s is a life well lived, he is remembered fondly by those he touched with his charm and charisma, he was truly interested in everyone he met, and he is deeply loved and missed by his friends and family.

Please visit the below blog for pictures and more details on Walt’s career and life.