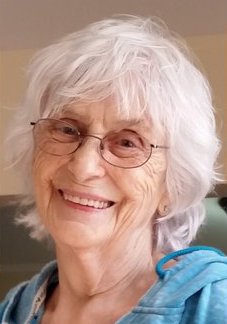 Virginia Madge Fox (also known as Mary) was born on June 13, 1932, passing away in death on December 31, 2019. She was born and grew up in the small town of Milton, Queens County, Nova Scotia, Canada to her parents, Starr & Olive Hatt. She was the middle child of 14 children, 4 girls & 10 boys. She had fond memories of growing up in Nova Scotia; swimming in the river, going to the beach, playing in the woods, and just being with her family.

When Virginia was 19, she married Harry Selig on November 19, 1951. They soon moved to Ketchikan, Alaska, where their sons Greg, Jeff, and twin boys Pat & Mike were born. She later married Jim Hanaman on April 30, 1960 in Ketchikan. Eventually they moved to Wisconsin & Nova Scotia, returning to Ketchikan in March 1963. Jim & Virginia had 6 more children: Karen, Philip, Kendall, Chrissy, and twin girls Melissa and Melinda.

Virginia later married Milton Fox. They remained in Ketchikan where they did commercial fishing together for many years. Virginia took pride in her work and had a reputation of being skillful in preparing the fish. Because of this the cannery would often pay them more for their fish than the other fishermen.

After Milton’s death in 1995, Virginia moved back to Nova Scotia to live with family. After a short time there she decided to move to Idaho to be with her children. In 2000 she rekindled a connection with her childhood sweetheart, Herbert Brewster, and they were together for the next 15 years. During these years she spent time in Nova Scotia, Ketchikan, and Idaho. After Herb’s death in 2015, Virginia made Idaho her primary residence, while spending many summers in Ketchikan. Though she lived in Idaho, in her heart Ketchikan was always where she called “home.”

In the mid ‘60s Virginia studied the Bible for a brief time with Jehovah’s Witnesses. Through the many years to follow she would read literature that her children would send her, and later she began to attend occasional meetings, assemblies, and conventions. In the summer of 2018, Virginia told her family that she wanted to be one of Jehovah’s Witnesses. She requested her own Bible study to help her continue to build a relationship with her heavenly father Jehovah. One year later Virginia was diagnosed with stage IV lung cancer. It was comforting for her family to know that she made the decision to dedicate herself to Jehovah in her heart, truly having faith in a better future where sickness and death will be things of the past. This hope also helped her to deal with her terminal illness up until the time of her death.

She was preceded in death by her parents Starr & Olive, her husband Milton, her brothers George, Kenneth, Richard, Dempsey, Douglas, Charles, Johnny, and Winston, her sisters Kay, Norma, and Hazel, and her two sons Jeff and Greg.

Virginia will be remembered for being a hard worker who was always generous and honest throughout her life. She was loved by all whom she met, and she often became everyone’s “Grammy.” She also had a firm determination to do what she set her mind to. Ultimately this led to the greatest decision she would ever make, and we rejoice in her hope to be reunited soon with her family and friends in the Bible’s promised earthly paradise.