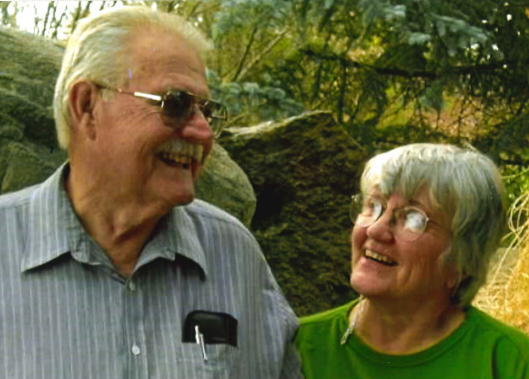 CITY AND STATE OF RESIDENCE OF DECEASED: Boise, Idaho

DATE & LOCATION OF MARRIAGE:  Married first time at the Grand Lake Chapel by Presque Isle, Mi. on Dec 18, 1971 Guess we couldn’t get enough of married life so we married again. The second time with our children’s wants and excitement. Even our granddaughter witnessed our celebration of love. Same day, same month.  Dec. 19, 1998. Easier to remember anniversaries that way.  We exchanged nuptials in the home of our close friends and fellow disabled veteran, Lorren Davis and his lovely wife Eve.

AREAS WHER RESIDED:   Dorothy was teaching art at Alpena High and use to live at the Spencer’s Old Range Lighthouse

After our first wedding we moved to Bear Point Rd and later to Grand Lake. Virgil and his brother Michael owned the Birch Hill Grocery, where they rented out boats and sold gas and worms.  and some groceries. His Mom and Dad often ran the store for them.  His Dad owned “Bigred” A big tow truck with a snow plow. Virgil and his Dad, Ellis Vinton Barnett cleared the roads of snow. Including the road to the Old Range light.  The year we first met had 14 snow days.

Moved into the city, Alpena to Bear Point and was still often snowbound. We bought our first cabin on Fireside Rd.

Later we moved to McCall, Idaho and managed Lakeview Village for Jed Bingham and later for Bill Harrah. We moved to Boise so that Virgil could go after his Masters in Social Work at The College of Idhao in Caldwell. By then we had three children and two in diapers living in a 31-foot travel trailer at the Coffee Grounds RV. Park.

We bought property at Paddy Flat, Idaho where Virgil and his Dad built a log cabin. Washed our clothing with creek water and how they sparkled actually glittered. Yep, a lot of fool’s gold in that water!

Virgil started working for The Disabled American Veterans as a National Service Officer. And found himself his own niche, his love of helping the veteran help himself, aiding and advising on how to get aid, education, benefits, and medical needs resolved. He worked for the D.A.V. for 17 years.

Even after he retired, he would work on Friend’s, and neighbor’s claims with Social Security.

Hobbies: He was a weight lifter and rode his bike 15 miles around Grand Lake every morning by 4 or 5 am. Became a Weight Watcher Counselor and he hit the front page of the Alpena News because he lost 150 some pounds a 32degree Mason of the Rogers City, Michigan Lodge #493 a Shriner, in Alpena, Michigan. Joined the Disabled American Veterans and became the National Service Officer for Idaho.

Virgil trained at the Great Lakes Naval Base. Even in Boot Camp he was leading his fellow recruits.  He was honorable discharged from  the reserve July 11, 1956. He later served on the USS.  Power DD 839.  Stationed in Canada, Cuba, Bermuda, France, Gibralter, Greece, Italy, Lebanon, Puerto Rico, Sicily, Spain, and Turkey. He was honorably discharged on from the United States Navy went back home to Rogers City only to discover that his parents had moved. He asked around and he called the local sheriff ‘s deputy and the deputy said to him, referring to Virgil’s dad, “Why yes, I’m looking at “Red” right now.  He is sitting in front of the kitchen window!”  The deputy’s home was right next door. He got a ride to Grand Lake, to the new home.

Both Virgil and brother, Michael joined their father Ellis Vinton Barnett in becoming Members of the Masonic Lodge #493. of Rogers City, Mi. All three were Shriners of the El Khurafeh Temple in Saginaw, Mi.

Children and their spouces: