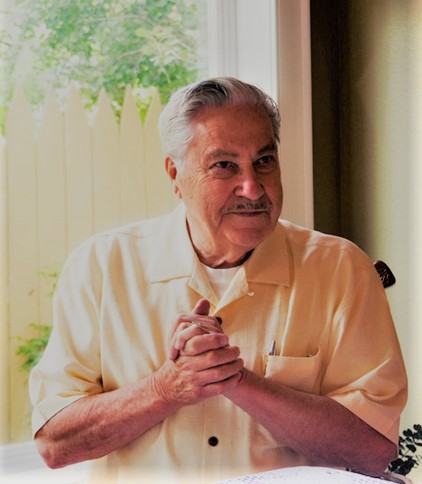 Heaven joyfully welcomed Vern Allen Gunderson on April 29, 2020, after a peaceful passing in Boise, Idaho surrounded by those who loved him. He was 94 years old. A celebration of his life will occur at a later date. In the meantime, we are confident that he is enjoying a grand reunion in Heaven with all of his dear family and friends.

Vern was born on March 15, 1926, in Petersburg, Nebraska, to Gilbert and Sophia Dyrebu Gunderson. He grew up on the family farmstead, along with his two sisters and four brothers immersed in strong Norwegian culture.

When he was five years old, he would happily stand on a chair and sing for the Lutheran church congregation. According to his mother, he had an excellent voice and enjoyed using his talent. He once decided to expand his musical territory and entertain the entire Boone County community by climbing up on a kitchen chair, dialing the general number typically used for emergencies, and singing his favorite hymn, “Looking Beyond.”

Vern attended District 33 elementary school in Boone County and was a model student. Occasionally, his mother would keep him home from school to assist her with housecleaning. She said he was her best helper. Apparently, these periodic housecleaning-related absences didn’t take much of a toll on his academic abilities. After successfully completing his elementary courses, he was presented a Certificate of Promotion and Admission to the Petersburg High School. He played drums in the high school band and remembers a little rhythmic competition when the band practiced. The Gunderson house was situated close to the school, and story has it that when the family washing machine was in operation, it could sometimes be heard during practice.
At the age of thirteen, Vern worked part-time at Leo Jullick’s pool hall, where he cleaned spittoons for the grand sum of five cents apiece. He also worked at Schlosky’s auto wrecking and made one dollar for every car he dismantled. When the Gunderson family left Petersburg in 1941 and moved to Emmett, Idaho, Vern resumed his schooling at Emmett High School.
In 1943, Vern joined the U.S. Navy aboard the USS Goodhue bound for the Asiatic Pacific. Even though a bout with scarlet fever would slow him down and a kamikaze attack on his ship would nearly take his life, he managed to survive and return home after being honorably discharged on March 23, 1946.
He married Mary Edna Murray on November 3, 1946, in the El Cerrito Gospel Tabernacle following the Sunday morning church service. It was destined to be a loving union of nearly 72 years. Their first daughter Deborah Lynne was born in 1950. They made their home in California until a move to Boise, Idaho, in the spring of 1960. Second daughter, Robyn Ann was born in 1972. They moved back to California and remained there until 1987, returning once again to Idaho to live closer to their oldest daughter and grandchildren.
Vern was a master upholsterer for nearly 65 years. Furniture, car, boat, or anything requiring fabric was beautifully transformed by his incredible talent. He also enjoyed camping, fishing, boating, and spending time with his family.
Vern Allen Gunderson is survived by his children; Deborah and Quincy Norris of Boise, Idaho, Robyn and Chandler Wilson of Renton, Washington; a brother Duane Gunderson of Wendall, Idaho; grandchildren Cindy and David Casey of Boise, Idaho, Lauren and Kerry Ball of Caldwell, Idaho, Cameron Wilson of Renton, Washington; and great-grandsons Cohen and Silas Casey of Boise, Idaho. He was preceded in death by his wife Mary, parents, sisters Myrtle and Bernice, and brothers Omer, Kenneth, Virgil, and Floyd.
His legacy is vast. As a man of honor, integrity, and faith, he led his family by example. His belief that life does not end here and that we will be reunited takes the form of hope in the hearts of his family.

“I’ll find you in the morning sun
and when the night is new.
I’ll be looking at the moon,
but I’ll be seeing you.”

Private family services will be Held.