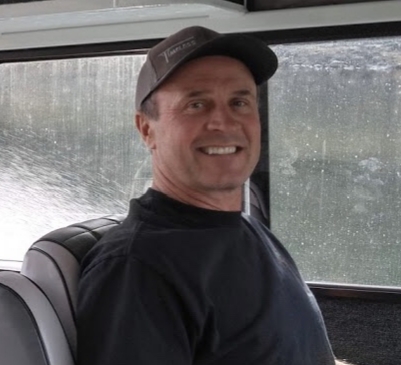 Tye Chamberlain passed away on September 19, 2020, at St Al’s Hospital in Boise, after he had a catastrophic fall at his home in Donnelly, Idaho.  He is the son of Lana and Kelley; and he owned and operated Chamberlain Excavation, Inc.

Tye was born on May 29, 1969, in Moscow, Idaho, when his Dad was a student at University of Idaho.  He lived his early years in Moscow, moving with his family to Rupert, Idaho, when his Dad graduated from WSU in 1977.  He made a lot of friends, raised hell, loved riding bucking horses in the rodeos, worked for his Dad and graduated from Minico High School in 1987.  He worked in Rupert and Boise before moving in the early 1990’s to Donnelly where his Dad lived.  He met and married Shelly Kleint in 1994, becoming Dad to Travis and then Kaylee when she was born in 1995.  He worked for several local excavation companies before establishing Chamberlain Excavation, Inc. in 2001.  He loved NASCAR and, thanks to their good friends Bill and Linda, he and Shelly went to a race with them in Arizona – that was a real highlight for Tye.  He and Shelly later divorced but remained friends and continued to parent the kids.  Tye married Mandi Wilfinger in Hawaii last year; Mandi brought her four children for Tye to love and he welcomed them with open arms.

Tye worked hard, had good work ethics he learned from his Mom and Dad, and successfully grew his business.  He loved life and lived every day to the fullest.  Fishing and hunting were top on his list of things to do, being outdoors whenever he could.  He loved his work but looked forward to retirement, sooner rather than later for sure. He lit up when he was with his Granddaughter Maci and was so excited and proud anticipating the birth of his Grandson – his daughter Kaylee ready to pop any day!

Tye is survived by his brokenhearted family and too many friends to count.  He leaves his wife Mandi, daughter Kaylee and her husband Zane Hardin, son Travis, Sativa and granddaughter Maci, Mandi’s children Gage, Hailey, Kinzy, and Carver, his Mom Lana and stepdad Jeff Servatius, his Dad Dr. Kelley Chamberlain and Debbie Bentz, his sister Wendy and her husband Kevin Domenighini and their children, stepsister Amber Krasselt, her husband Travis, and stepbrother Jake Servatius and their families, father-in-law Larry Wilfinger, brothers-in-law Ryan, Chad and his wife Brandy, Baron and his wife Melissa, and their families.  He leaves many cousins, aunts and uncles, and his best friend Russ.  He made friends easily and had many life-long friends.  He was preceded in death by his good friend Jeff – that was heartbreaker for him, and all of his grandparents with whom he shared mutual love and caring.

The family thanks Bowman Funeral Home and is planning a gathering to celebrate his life near the river he loved on October 24th.  In lieu of flowers or donations, the family suggests you just go fishing – that’s what Tye would have wanted you to do!

The family thanks Bowman Funeral Home and is planning a gathering to celebrate his life near the river he loved on October 24th.  In lieu of flowers or donations, the family suggests you just go fishing - that’s what Tye would have wanted you to do!