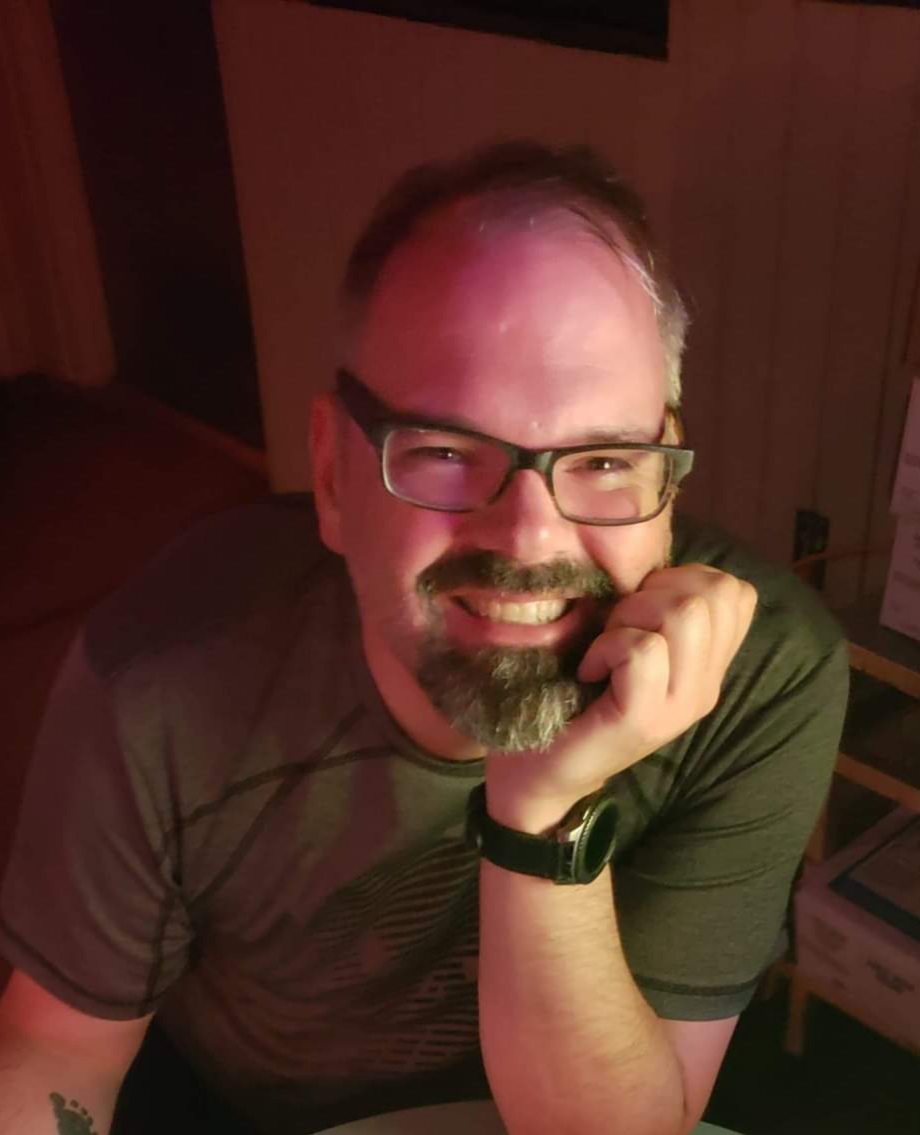 Timothy “Tim” Lee Hood, 43, of Kuna, Idaho passed away on June 29, 2021 while physically and virtually surrounded by family and friends, and in the arms of the love of his life, Sara Garrett.

Tim was born on July 9, 1977 in Jackson, MS to Martha (Harper) Hood and Charles Hood and was the youngest of the 7 siblings. He began his early childhood in Jackson, MS and moved to Alaska in 1979. Tim spoke often and fondly of his time growing up in Alaska. He enjoyed the time he spent with his Dad working on airplanes, flying, spending time with his Mom, having fun with family and friends, going to music festivals, and the many adventures he had when he lived there.

Growing up with older siblings, Tim made his first best friend at a very young age. Nikki (Cox) Owens was Tim’s niece, but being only a year and a half apart, they grew up more like siblings. They were often dressed the same as young children, so people often thought that they were twins. They enjoyed this thought so much that even as adults, and after Nikki moved further away, anytime they were able to get together, they would take time for “Twinsie Time” to spend time just the two of them to enjoy each other’s company and the close bond that they shared.

Tim graduated from Lathrop High School in 1996 and later received his bachelor’s degree in Information Technology and Software Development from Western Governors University.

Tim moved to Idaho in 2003 with his Mom and Dad and after a few months in Mountain Home, he moved to Boise. He married Cassidy Slover and eventually moved to Kuna. They later divorced in 2018.

Tim loved Kuna and all of Idaho. He enjoyed many activities, and frequently found himself just driving around looking at all the beauty that the state has to offer. He enjoyed camping, fishing, visiting the caves near Twin Falls, Bruneau Sand Dunes, Swan Falls Reservoir, and so much more.

Tim had a long-time love for all things technology. He would happily tell anyone who accused him of being a “Nerd” that he was actually a “Geek” since he wasn’t socially awkward. Tim worked for several places that gave him knowledge and challenges in the IT industry, but one of his favorite places that he worked was Kuna School District. It was here that Tim met his best friend Curtis Long (Boise, ID). Tim had the pleasure of continuing to work with his best friend when they both changed jobs to working in the government sector in 2015. Tim always held this friendship in the highest regard, and they supported each other through life’s ups and downs. Watching them banter back and forth and get in very deep discussions about so many things was both entertaining and uplifting.

Tim had many loves in his life. Tim loved music, singing, karaoke, Star Trek, Star Wars, building high-end light sabers, Marvel, and much more. He usually found happiness in anything he did. Four of his favorite things to love were his children. Tim was blessed with his first born, a son, Keegan Raye Hood in December of 2007. Tim and Keegan were “brain twins” and could get lost for hours discussing tech, Marvel, gaming, and random thoughts. Tim was blessed a second time in March of 2011 with his second son, Kellen Lee Hood. Tim and Kellen were very close, and everyone always said how much they looked alike. Tim thought all of his babies were so beautiful and bragged about them often. In 2018, Tim met his best friend, Sara Garrett, while out to sing karaoke. They became best friends immediately as they had so much in common. After a few months and after supporting each other through struggles and uplifting each other, they added to their friendship and became more than just friends. Tim and Sara had their first date in late November of 2018 by going out for karaoke, and officially became a couple in February of 2019. If you ever had the opportunity to spend time with them, you could not help but see the love that they had for each other. They were truly each other’s other half. They sang karaoke together often, worked at various venues across the state as DJ’s and owners of Hummingbird Entertainment, enjoyed experiencing life together, spending time with their children, and building a love that only seems to happen in fairy tales. They really were perfect for each other. Meeting and falling in love with Sara was when Tim was blessed with his other two children. Kiana Katherine Garrett and Christopher Sterling Garrett were more than just Tim’s stepchildren. Before Tim’s passing, he and Sara had begun the process of filing for Tim to adopt the kids he always said were meant to be his. He always wanted a daughter, and he and Kiana became close very quickly. He adored her and her fiery and fun-loving spirit. He lovingly called her his “Little Blonde Daughter”. Tim was always so proud of how big Christopher’s heart is and how happy, smart, and loving he is. He would say “My Little Bubs” with a smile whenever speaking to or about him. Tim and Sara brought their kids together in the home they shared in Kuna which was to be their “Forever Place”.

Tim was also blessed to have a whole other family brighten his life and love him as family when he met Sara. Sara’s parents, Kirk and Tina Van Leeuwen, her siblings Lindsay and Michael Brasier, and Quintin Van Leeuwen, as well as her nephews Dalton and Zaedyn Braiser and her many extended family loved him immediately and made the effort to show him that he was part of their family now too. Tim would often joke about how they loved him more than they loved Sara. He was sure it was true. Tim talked often about how he was blown away to be so unconditionally loved and accepted by Sara’s family, and how much he loved how close everyone was. Tim and Sara spent time with her family often, and Tim enjoyed all the fun times playing games together, camping, BBQ’s, birthday parties, gatherings, and as Tim called them: “Tina Fires” in the backyard fire pit.

After talking to his 4 little loves and Sara’s family and getting their approval, he proposed to Sara on Feb 29, 2020. She happily said “Yes!”. They were often heard referring to each other as “My Universe”, which was their secret way of saying “I love you” when people got tired of hearing how often they said it. To them, it meant “I love you with everything that came before, everything that is now, and everything that will be.” They were to be married Sept 5, 2021. Unfortunately, in March of 2021, Tim fell ill and struggled a lot with his health. Sara was by his side every step of the way, through every procedure, doctor’s appointment, and hospital stay. The unconditional love and support that they showed each other was incredible. They could get lost in each other for hours in deep conversation, just in their own little bubble, about everything. Tim often bragged about Sara. Even in his final hospital stay, he would tell all the nurses and staff about how she was his beautiful soon-to-be wife, and how he was so proud of her and so in love. He would beam whenever she entered the room, and she lit up the same at the sight of him. Tim had many friends, but the closest friends were always just family. This love and friendship that he showed, lovingly earned him the title “Brister” by Jess Kugler, who Tim adopted as family. Two other family members he adopted as his brother and sister were Dave and Crickett Warren, and he loved them dearly. The love and acceptance that Tim showed everyone that he encountered was one of the many great things about knowing him. He lived his love loud.

Tim is survived by his fiancé Sara Garrett of Kuna, ID, his 4 children Keegan and Kellen Hood and Kiana and Christopher Garrett, all of Kuna, ID, his father Charles Hood of Boise, ID, his mother and father-in law Kirk and Tina Van Leeuwen of Winchester Bay, OR; his brothers and sisters, Norman (Trish) Brogan of Fincastle, VA; Rusty Hood of Kenner, LA; Cindy (Brian) Cox of Caldwell, ID; Charles Jr (Twanna) Hood of Anchorage, AK; Rene Juza of Boise, ID; Alan (Kelli) Hood of Wasilla, AK; Quintin Van Leeuwen of Winchester Bay, OR; Michael and Lindsay Brasier of Kimberly, ID; as well as many nieces, nephews, cousins, other family, and a multitude of friends.

Tim is preceded in death by his mother Martha Hood, and nephew Adam Cox.

A Celebration of Life for Timothy Lee Hood is planned for July 17th, 2021 from 6-10 pm at Deja Brew 112 E Idaho Ave. Meridian, ID 83642. Please join us in fulfilling Tim’s request for karaoke, music, and fun in celebration of him.

In lieu of flowers, the family requests considerations of financial donation to a GoFundMe set up to assist with Tim’s final expenses and to support his fiancé Sara. Donations can be made by visiting https://gofund.me/f9ed1cdc and will also be accepted at the Celebration of Life.

A Celebration of Life for Timothy Lee Hood is planned for July 17th, 2021 from 6-10 pm at Deja Brew 112 E Idaho Ave. Meridian, ID 83642. Please join us in fulfilling Tim’s request for karaoke, music, and fun in celebration of him.