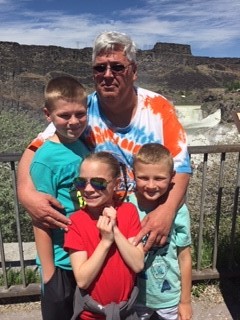 Thomas “Tom” Edward Watson, loving husband of 41 years to Barbara, father to Christina and Michael and their spouses, Greg and Kris, and Papa to Mikenzie, Carter, Olivia, and Jaxson passed away at home surrounded by his family on July 18, 2019 after a courageous battle with renal cancer.

Tom is survived by his brothers Ken Watson, Curt Watson, Bill Watson, Jim Watson, Ron Watson, and his sisters Margaret Dennis, and Carrie Botts. He was preceded in death by his step father, Tom LaFong, his mother, Lucille LaFong, and his father, Curtis Watson.

Tom was a magnanimous person who was always willing to help. He was compassionate and loving.

Tom was born in Oak Park, Illinois on August 21, 1958 to Lucille and Curtis Watson. He moved to northern California when he was eight years old and lived throughout the south bay area. Tom graduated from San Mateo High School in 1976.

Following high school, Tom chose to proudly serve his country and enlisted in the United States Coast Guard. He was first stationed in Cape May, NJ on the USCGC Alert. In 1977, Tom was stationed on the USCGC Burton Island ice breaker. He proudly served his fellow guardsmen as the ship’s cook. He had the pleasure of traveling around the world including the North Pole, South Pole, Antarctica, New Zealand, and Fiji. During his service in the Coast Guard, Tom was also stationed in Galveston, TX, Alameda, CA, Atlantic Beach, NC, Monterey, CA, and lastly Bodega Bay, CA. He earned several awards for his service and culinary expertise.

Tom met the love of his life, Barbara, on July 15, 1977 in Petaluma, CA while training at the Coast Guard culinary school.  Tom always said he knew he would marry and spend the rest of his life with Barbara on the first night they met. Tom and Barbara married on November 5, 1977 in Santa Clara, CA. They had the joy of raising their two children, Christina and Michael and built a family and life centered around love, respect and partnership. Tom and Barbara’s marriage serves as an example of true love to friends and family.

In his career, Tom used his culinary skills to cook, cater, and manage restaurants and care facilities. Later in his career, Tom worked in sales and training in the pest management field as a sales executive and training facilitator for Ecolab. He enjoyed meeting new people and he could make a connection with anyone he met. He always strived to be a leader and show integrity in his work. Tom retired from Ecolab due to disability and moved to Meridian, Idaho in 2005.

Following his retirement, Tom learned he would be a grandfather and proudly announced that his next “job” would be to care for his grandson, Carter. Tom subsequently cared for each of his grandsons, Carter and Jaxson, from the time they were six weeks old. He was loving, caring, and sometimes just plain silly with his grandchildren. Tom treasured his time with Mikenzie, Carter, Olivia, and Jaxson and spoiled them whenever he could. He created special traditions with each of them and loved them unconditionally. He supported them at school and sporting events. Tom was a source of comfort for each of them and could often be found snuggling the three youngest in his Papa chair at one time. Tom’s grandchildren describe him as the “Best Papa in the World.”

Tom enjoyed anything related to sports and had an incredible knowledge of the sports world. In addition, he liked to tie-dye, tinker in the garage, and cook for his friends and family. He also served his neighborhood as the president of his HOA. He worked tirelessly to make his subdivision into a close-knit community.

Tom was an amazing man. He loved and served his family, friends, and community each day and lived his life with passion. Although he will be sorely missed here on Earth, we know he is doing great things beyond and will be waiting to welcome each of us home.

In lieu of flowers, please consider donating to the American Cancer Society through his sisters’ fundraiser page at https://mobileacs.org/2xU4DDa. Carrie and Margaret started supporting and fundraising following the death of their parents due to cancer and this cause was very important to Tom.

Tom’s life will be celebrated on August 9, 2019 at 11:00 a.m. at Ten Mile Christian Church in Meridian, ID. The family asks that guests wear something tie-dyed, bright, or something from one of Tom’s favorite sports teams (Dallas Cowboys, BSU Broncos, SF Giants) because Tom disliked the color black and would rather see his family and friends celebrate than mourn. Reception to follow at 4246 W. Hearst St, Meridian, ID 83642.

Per Tom’s request, his ashes will be scattered by the U.S. Coast Guard near the Golden Gate Bridge at a later date.