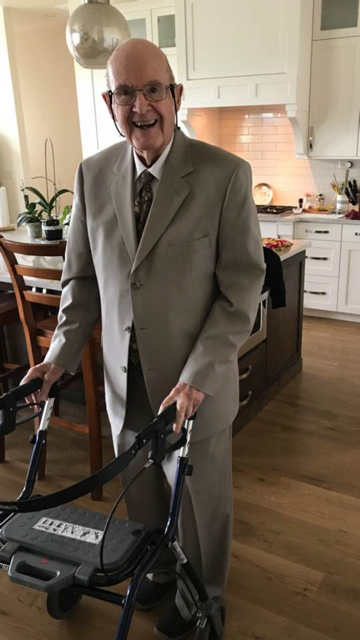 Thomas Robert Phillips Jr, 97, beloved Dad, Grandpa, Great Grandpa, Great Great Grandpa, and best friend to all passed away on February 23, 2020.
Tom was born February 7, 1923 in San Francisco, California to Florence Neary Phillips and Thomas R. Phillips, Sr. Tom was raised in Oakland, California and graduated from Castlemont High School. His music career started early, and he was a professional jazz saxophone player by high school. He performed in the San Francisco Bay Area during the “Big Band Era” with many of the well-known jazz bands of that day.
He met the love of his life Shirley Louise Duffin while playing in a dance band at the age of 16. They were young sweethearts and married while both were 19. Tom enlisted in the Navy after the bombing of Pearl Harbor, Hawaii. He served as an intelligence officer at Pearl Harbor, Hawaii for 2 ½ years.
He attended Lewis and Clark college in Oregon after which they returned to San Francisco where Tom received his music teaching credential. He taught the jazz band, band, and orchestra at Arroyo High School in San Lorenzo, California for many years. He later went on to become the Music Coordinator for the San Lorenzo School District. He was influential in developing many musical talents during his teaching career and was a favorite teacher of all his students. His jazz bands took many prestigious music awards at national competitions and were invited to tour Europe for two summers.
Tom was an active leader in the Church of Jesus Christ of Latter-day Saints, serving as a Bishop, counselor to the Bishop, and many high councils of the church.
Tom was a family man. He and Shirley raised four children, Norm, Melody, Joy and Diane. Summers were spent traveling to Yosemite, Lake Tahoe, or the sunny beaches of California. Life was beautiful for his family. Tom is cherished by all of his family members. He will be fondly remembered by all those whom he encountered. He loved life and living and was always commenting on how fortunate he was to have such a wonderful family. After our Mom, Shirley passed on, an old high-school friend Barbara Johnson contacted our Dad. She had just lost her husband also; they were able to marry and be companions to each other after the loss of their spouses.