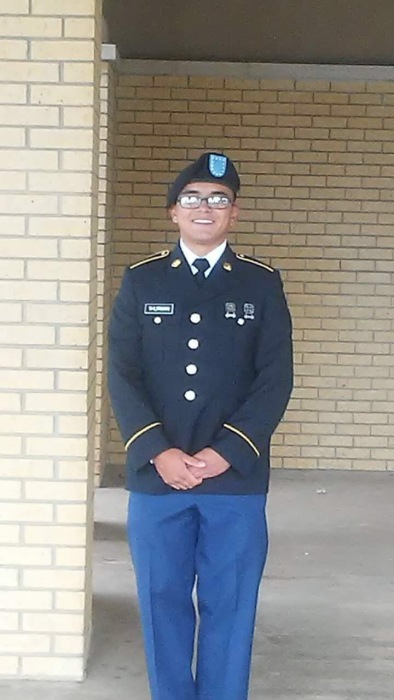 SPC Michael Travis Osorio, 20 of Horseshoe Bend, Idaho passed away on April 23, 2019 in Iraq serving his country.   Michael was born to David and Jennifer Osorio on November 21, 1998.  He attended grade school in Salt Lake City, Utah and finished his schooling in Horseshoe Bend, graduating from high school with honors in May of 2017.

Michael loved to play all sports, but his favorite sport was basketball.  He was an asset to the team winning MVP, most improved player award, and made second team all-state.  He was invited to Australia by Down Under Sports to play basketball.   Michael had the ability to make friends and made numerous friends wherever he went.

Michael joined the Army in July 2017, he did basic training at Fort Sill, Oklahoma.  From there he continued to AIT at Fort Huachuca, Arizona after which he was stationed at beautiful Fort     Carson, Colorado as an Intelligence Analyst in the 3rd brigade of the 4th Infantry Division.  He was a dedicated soldier who climbed the ranks quickly and earned many impressive medals and awards during his time in the service.   Michael was awarded the Global War on Terrorism    Expeditionary Medal, Army Achievement Medal, and Army Commendation Medal.  Sadly,    Michael passed away doing what he loved best serving his country on April 23, 2019.  Michael  was loved by all who knew him.

Michael is survived by his parents David and Jennifer Osorio; brothers  PFC Dominic Chavez who followed in Michael’s footsteps and is actively serving at Fort Polk in Louisiana, Jesse Osorio, Luciano Osorio; Grandparents Walter and Sharlene Earl of Idaho, Leo and Pam Leonard of Utah, Terry Garcia of Utah, Jesus and Etelving Osorio of Emmett, and Pauline Martinez of Utah.  Michael was preceded in death by his Uncle Bobby Martinez and Aunt Anita Gallegos.

A funeral service will be held on Friday, May 10, 2019 at 12:30 pm with a visitation held one hour prior to the service at Horseshoe Bend High School located at 398 School Road Horseshoe Bend, Idaho.  A committal service will take place at 2:30 at the Idaho State Veterans Cemetery.          Condolences may be left for the family at www.bowmanfuneral.com