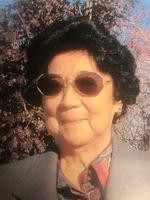 Shizuye Inouye, 94 of Payette died September 1, 2020 at a Payette Assisted Living. She was born January 4, 1926 in San Jose, California to Genpachi Nakagawa and Tsugi Kani. Shizuye was reared and educated in Southern California in Norwalk and Artesia area until evacuation in 1942 to Santa Anita Assembly Center. She and her family were later transferred to Rohwer, Arkansas Relocation Center. On July 13, 1943, she graduated from Rohwer Relocation High School and received her diploma from Rohwer Relocation Center. She left the center and departed to Los Angeles, California in 1946 and worked a few years as a domestic worker. Shizuye married Tad Inouye on December 26, 1948 at the Los Angeles Nishihongwanji Betsuin. They came to Fruitland and have lived in Payette since. She enjoyed golfing, most of all helping at the Idaho – Oregon Buddhist Temple and being with all her friends and of course playing Shanghai game with her friends. She also mentioned that her friends were very comforting after her husband had passed away on March 22, 1996.
She was a member of the Idaho – Oregon Buddhist Temple, Idaho Oregon Buddhist Women’s Association and the Nikkeijin Kai and JACL.
Survivors are two sons Jerry Inouye and his wife Susan, granddaughter Jayne Pankratz and husband Jeff, great grandson Braxton and great granddaughter Mckinley. Grandson Jeffrey Inouye and his wife Sally, great grandsons Tad and Max. Tad Inouye Jr., and his wife Jennifer, granddaughter Jasmine, grandson Lucas and her daughter in law Jeri Rae, widow of her son Tom and daughter Casey. She is also survived by numerous cousins, nieces and nephews. She was preceded in death by her husband, Tad Tadaji, her son Tom, her parents, and her brother “Tom” Takanori Nakagawa and sister Sakeye Sakaida.
Due to the COVID situation, private family services will be held at Riverside Cemetery, where she will be laid to rest next to her beloved husband. Friends and family are encouraged to visit their grave, September 7th or thereafter. Condolences may be made to the family at www.bowmanfuneral.com