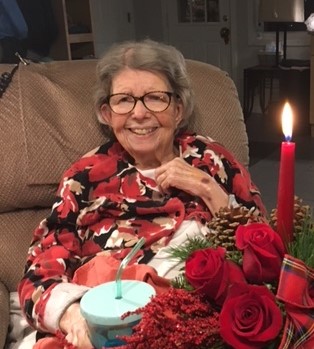 Ruth Merritt Nations died on Tuesday, August 24, 2021, in Boise, Idaho. She was 93.
Ruth was born August 3, 1928 in Wichita Falls, Texas, the second daughter of Silas
Merritt and Martha Mahler. She attended school in El Paso and graduated with a major
in biology and a minor in English from the Texas College of Mines, which would later
become the University of Texas at El Paso. As a co-ed, Ruth pledged the Chi Omega
sorority. She met her future husband, Lloyd Harry Nations, in a bacteriology lab, and
they married on June 1, 1949, the day after their graduation. After her graduation from
college, she taught elementary and high school for a year. She and Lloyd then relocated
with his work for the Southern Pacific Railroad to Truckee, California, where Ruth began
to focus on raising her family. Lloyd and Ruth were married 64 years. The couple had
three children, eight grandchildren, and Ruth lived long enough to sing “Happy birthday”
to 25 great-grandchildren.

Ruth had a rich soprano voice and studied music as a young woman. As a member of
her El Paso high school chorus, she sang hymns and popular songs to recuperating
soldiers in the local hospital. Despite her struggles with performance anxiety, she
learned solos of sacred music and performed at Christmas and Easter services at the
local Baptist Church. She was a big fan of grand opera and memorized arias from
Puccini’s “Tosca” and “Madama Butterfly.” In her 90s, despite declining memory, she
could always be coaxed to sing along with her caregivers, often helping them recall the
later verses of songs.

With her husband’s frequent moves as an employee of the Southern Pacific Railroad,
Ruth provided a haven for the family in dozens of cities and towns throughout the
southwest, from El Paso, Texas to Carrizozo, New Mexico, from Yuma, Arizona to
Foster City, California, and many places in between. In retirement from the S.P., Lloyd
and Ruth bought the Highland Cafe in Oildale, California, with barbecue as their
specialty. Later they bought the Barbeque Factory in Bakersfield. In these businesses
Ruth essentially underwent a transformation from homemaker to business manager.
Ruth was born into a Baptist home and was later baptized a member of the Church of
Jesus Christ of Latter-day Saints. She was fond of reading the Bible and the Book of
Mormon with her adult children, and enjoyed the hymns of both religious traditions. She
was a woman whose roots in the Christian faith ran deep and no day was complete
without a prayer before bed.

She is survived by her daughter, Lynn Nations Johnson, and two sons, Mark and Steve
Nations.

Ruth’s remains will be interred alongside her husband’s at the Bakersfield National
Cemetery. Her memorial service will be streamed live over Zoom on Sunday,
September 26 from 4-6pm PST. Interested friends and family please contact Lynn at
nationsjohns@gmail.com for a link to the memorial service.

Ruth’s remains will be interred alongside her husband’s at the Bakersfield National
Cemetery. Her memorial service will be streamed live over Zoom on Sunday,
September 26 from 4-6pm PST. Interested friends and family please contact Lynn at
nationsjohns@gmail.com for a link to the memorial service.