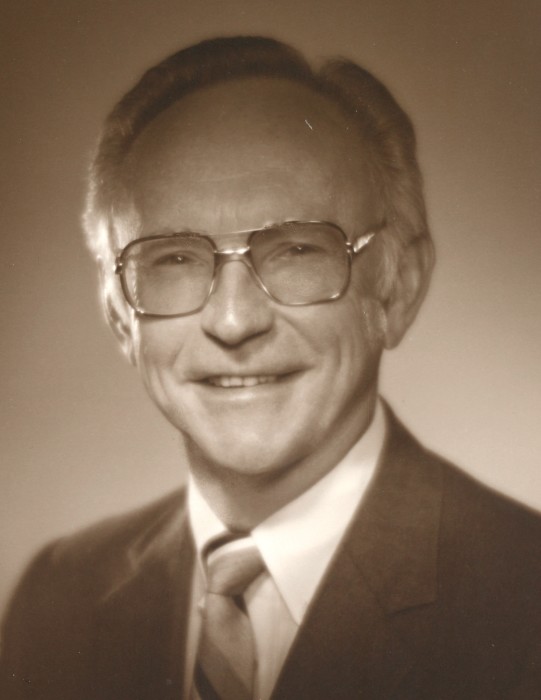 Russel Forest Viehweg was born on December 3, 1927 in Twin Falls, Idaho. He was raised by John Paul and Theresa (Heusler) Viehweg, with his two sisters, Lolita and Thelma. He graduated from Twin Falls High School in 1945, enrolled in the University of Idaho and pledged to the Delta Tau Delta Fraternity. Russ was a loyal Vandal during his lifetime.
After three semesters, Russ was drafted, deployed to Japan and served in the U.S. Army for two years. He was a typist and played the coronet in the U.S. Army Band. After his service, he used his G.I. Bill to return to the University of Idaho and finish his degree in Accounting, graduating with highest honors in 1951. During college, Barbara Livingston, a Tri Delt, asked Russ to a formal dance. Barbara decided that Russ was just her type of guy: tall, bright, and a very good dancer. They were married on July 19, 1953, in Buhl, Idaho.
Russ and Barbara moved to Boise and started a life together as a generation of career builders. Russ was hired by the accounting firm Wells, Baxter, Miller CPAs which later became Low, Viehweg, Hill, and Grow CPAs. After a successful few years, their accounting firm merged with Touche Ross, now Deloitte. Russ became the managing partner for the Boise office and later was selected as a Senior Partner and a member of the national administrative board of Touche Ross in New York City. Russ and Barbara worked together to maintain their family life in Boise while he commuted back and forth to New York City for work. During his time in New York, they both enjoyed meeting new friends, Broadway musicals, cultural events, fine restaurants, and the many opportunities to travel for work and pleasure. In his free time, Russ loved skiing at Brundage, remodeling the McCall cabin, and traveling the world with Barbara and friends. He retired from Touche Ross in 1989.
While Russ was an avid businessman, he was also an active citizen in the Boise community. He was a member of All Saints Episcopal Church, The Arid Club, and Hillcrest Country Club, where he served as President. He also served on the boards of Boise Rotary Club, YMCA, The Arid Club, Fundsy, Idaho Youth Ranch and various other organizations.
Russ and Barbara have three children: Becky Grover (Rob); Tim Viehweg (Jean); and Katie Weitz (Dave). They have six grandchildren and three great grandchildren: Christine Quist (Ian); Alex Grover; Mollie, Henry and Max Weitz; Joseph Viehweg; Swede, Aric, and Ole Quist; niece Terry Baldwin; and his beloved cat, Buster.
If you were to ask anyone what comes to mind when they think of Russ, you would hear about his great sense of humor, intelligence, diligent work ethic, impeccable penmanship, along with his fairness, honesty, kindness, and generosity to many individuals and organizations.
A celebration of life will be held on Sunday, November 24, 2019 at Hillcrest Country Club from 2:00 to 4:30 p.m. In lieu of flowers, contributions can be made to the Y Camp at Horsethief Reservoir (ymcatvidaho.org), the Russel F. Viehweg Scholarship Endowment at University of Idaho (uidaho.edu/uidahofoundation) or a charity of your choice.