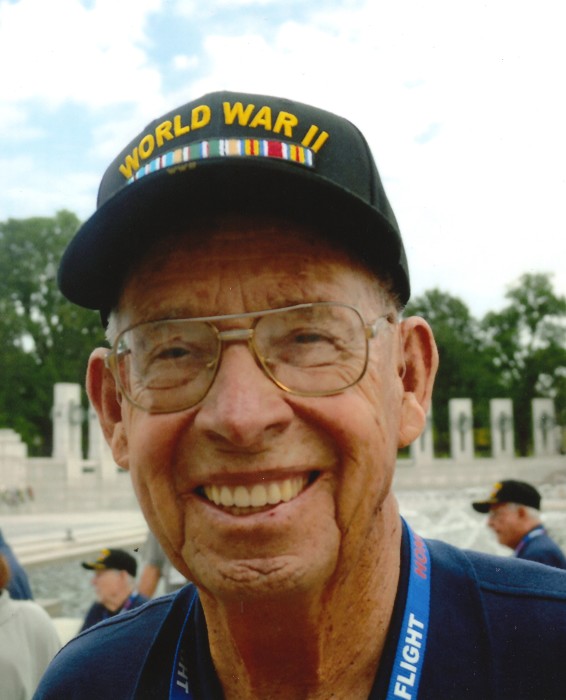 Ruel H. Barrus, 94, passed away in Boise on August 3, 2019.  A patriotic man, a loving husband, father, grandfather, and great-father, as well as an avid fisherman, hunter, water-skier, a devoted employee, and friend, Ruel will be greatly missed. His life centered on his family, his love of the outdoors, and his work. Ruel was born in Groveland, Idaho on April 20, 1925. He grew up in Groveland, attending and graduating from Blackfoot High School. He then proudly served in World War II in the United States Army 94th Infantry Division, Third Battalion, 302 Regiment, Company L, Third Platoon in the European Theatre. Ruel was captured during the Battle of the Bulge in December 1944 where he remained in a Nazi Germany Prisoner of War camp until liberated by the Allied Forces at the end of the war in 1945.

Returning from Germany safely, Ruel began his next journey as a member of the Mu Iota Chapter of the Phi Gamma Delta Fraternity at the University of Idaho where he graduated with a Bachelor Science Degree in Electrical Engineering. Ruel married his high school sweetheart, Jean McCue, in 1947. They were married for 60 years and built a lifetime of memories together, raising two children, a daughter and a son. Jean precedes Ruel in death. He is survived by their daughter, Debbie (David) Kaspar and their son, Bill (Jennifer) Barrus as well as seven grandchildren and six great-grandchildren.

After graduation from college, Ruel began his 36-year career as an electrical engineer with Idaho Power Company, working in Pocatello, Boise, and Payette. Amongst the many projects during his long career of which he was most proud, Ruel participated in providing the initial supply of power to multiple communities including Yellow Pine, Bear, and the Bogus Basin Ski Resort. He retired as the Power Distribution Manager for Idaho Power Company. Many summers were spent with company friends and their families on or near the water, boating and water-skiing.

After retirement, Ruel and Jean traveled throughout Europe, even returning to Normandy and the site of his POW camp. The couple also enjoyed many cruises. One of his favorite trips was through Central America where his appreciation of engineering was demonstrated in the marvels of the Panama Canal.

Ruel enjoyed watching his son, daughter, and grandchildren participate in many performing arts and sporting events, from band, piano, and choir concerts and ballet recitals, to baseball games, equestrian and gymnastic events, swimming, track/field and cross country meets, basketball games, and competitive shooting. In his later years, Ruel enjoyed spending winters in Arizona with Jean and their friends, golfing in the warmth as much as possible and enjoying the community of friends. Ruel was a passionate baseball fan, and he had the opportunity to attend many spring training games in Arizona. He especially enjoyed throwing an opening pitch for the Boise Hawks to begin a game last year. He was proud to have served his country and also had the honor and privilege of participating in the Honor Flight to Washington, D.C. with other veterans in 2015. Ruel showed his patriotism in many ways, particularly by sharing stories with others. This country has lost one of its unsung heroes whose life fully demonstrated love of family, love of country, love of the outdoors, and love of hard work.

His family would like to thank Ruel’s many neighbors, friends, and caregivers for their care and kindness, especially over the last two and a half years, particularly the staff and caregivers at Boise Veterans Memorial Hospital, The Bridge-Garden Plaza of Valley View, and Heart ‘n Home Hospice and Palliative Care.

A family gathering will be held at Bowman Funeral Parlor on Tuesday August 6, 2019 from 5:30pm to 7:30pm. Burial services will be conducted at Dry Creek Cemetery with military honors on Wednesday August 7, 2019 at 12:00 pm noon.

In lieu of flowers, kindly consider a donation to be made in the name of Ruel H. Barrus, University of Idaho, College of Engineering, Department of Electrical Engineering.

shopping_cart My Cart
Previous Evelyn L. Rock
Next Next Post