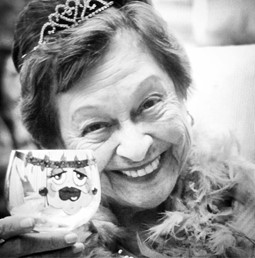 Rosalia, or Rosie as many knew her, was a loving, cheerful and funny 95-year-old… even until the last couple of days she was making jokes with her granddaughters, sons, and daughter by her side.  We held her hands until her last breath.

Mom came to the United States in 1960, following the man she loved – Roberto (as she would say, “love him with all my heart”, placing her hand on her chest). They had met years before in Buenos Aires, Argentina.

Mom was born in a little northern town called Formosa and Dad (Roberto Lucio Fernandez, 1915-1992) was born in Buenos Aires. They had a love story that could be made into a Hollywood movie, very romantic, dramatic, and intoxicating. This mad love brought them to Lake Tahoe, Nevada so they could be together forever. Patty (Patito) was born in May of 1963 and was at their wedding in a basinet. Dad played the piano at Harrah’s Casino and Mom did odd jobs here and there while she struggled learning how to speak English at night school, coming home crying because it was so hard and missing her beloved family and country. Their love is what kept them going and made them persevere. For a few years they owned some restaurants. “La Guitarra” in Lake Tahoe and then in 1965 we moved to San Francisco where they owned Roberto’s Restaurant on 43rd and Vicente.

At Roberto’s Restaurant, Dad was the chef and mom, and Blanca would wait tables. Then at 10:00 PM they would put on their tuxedos and evening gowns and put on a show for the customers. Rosalia would sing and Roberto played the piano. A good friend Roberto Chiofalo played keyboards with them too. Most nights it was a party until well after midnight while Patty slept in the booth in the back. Those were amazing times filled with tangos, love, friendship, laughter, and wine. In 1967 the restaurant was sold, when La Nona (Dad’s mom) died. We went back to Argentina to take her ashes. That’s where Bobby and Fab were born, in Mar Del Plata. Later in Mar del Plata they opened another restaurant. Then it was once again time to move back to the USA so, to Reno we went. More restaurants and casino jobs followed… always accompanied by tangos on Dad’s piano.

The 70’s took our musician Dad and our family to California. This is where our beloved Mom went to school to become a hairdresser and we met lifelong friends. Our parents became American Citizens in 1978. We lived in Glendale, CA for the remainder of Dad’s life. Dad left us in 1992 and, heartbroken… Mom’s life would never be the same.

In 2007, Rosalia moved to Boise, Idaho to help Patty and her husband Tom. Tom had been diagnosed with Cancer. Mom helped with everything at any time… She was constant. Very strong and willing, she has been a pillar for our whole family. Always helping, caring, and loving with her whole heart. This is where she spent the last of her days enjoying time with family and so many friends and neighbors that loved her.

Abuela, as she would be called by all… you will be incredibly missed.

May you rest in peace always, with our Dad by your side. You will be in our hearts forever…we love you so much!

Thank you for everything.

Sometime this summer her ashes will be scattered off the coast of Santa Monica, California (same as we did for our Dad). A celebration of life will be held at a date yet to be determined at Springhouse at the Merc, Hidden Springs, Idaho and in North Hollywood, California.

Sometime this summer her ashes will be scattered off the coast of Santa Monica, California (same as we did for our Dad). A celebration of life will be held at a date yet to be determined at Springhouse at the Merc, Hidden Springs, Idaho and in North Hollywood, California.