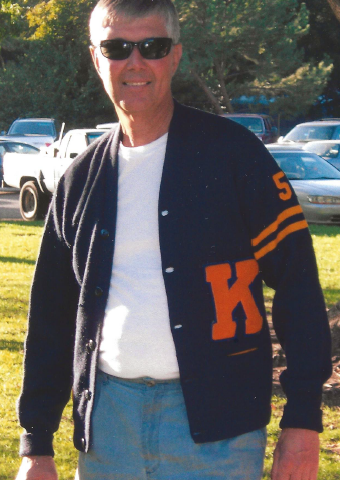 Our beloved Husband, Father, Grandfather and friend passed away peacefully in his sleep due to complications from Alzheimer’s on December 30, 2021 in Meridian Idaho. He was 82 years old.

Ron had a career as a pilot with TWA for 25 years and retired as a Captain. Before becoming a pilot, he taught math for 3 years at Lakewood High School in Lakewood California.

Ron graduated from Kelso High School in 1957 and received a basketball scholarship from Western Washington State College playing on the varsity basketball team all 4 years.

Ron received his BA in education in 1961 and a BA in mathematics in 1963 from Western Washington State College. In 1961-1962 he also attended graduate school at the University of Washington.

Ron treasured the time he was able to spend with his family and planning memorable vacations was a must. Whether it was a week stay at Bass Lake waterskiing, going to Hawaii, or a simple picnic and bocce ball at the local park, gathering the family together was important to him.  He enjoyed traveling, camping, waterskiing, snow skiing and snorkeling in Hawaii. Being an avid Boise State Bronco football fan, he got a kick out of watching them play on their famous blue field. He was also a competitive bridge player and loved listening to music from his generation.

Ron was always active in his Church and in the community. He loved playing tennis and was involved in the Ojai Tennis Tournament for many years. He was also a lifetime member of the Ojai Valley Athletic Club where he spent many hours socializing and making friends. He was a volunteer with Help of Ojai and found it very rewarding. He was also a volunteer for graffiti removal for the city of Ojai.  Upon retiring from flying, he became an assistant soccer coach at Nordhoff High School and then went on to be the head coach for two years.

Ron was a great man and had a positive influence on many people throughout his life.

Keeping with Ron’s giving spirit, his remains were to be donated to Science Care for medical research in lieu of a funeral. However, due to Covid-19 guidelines they are currently not accepting any donations. Therefore his family will be spreading his ashes out to sea at a later date.