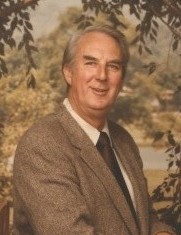 Rodney Taylor Floyd passed away on Friday, May 24, 2019, surrounded by his family at his home in Nampa, ID. Rod was born August 18, 1927, to Florence and Earl Floyd in Driggs, Idaho. Rod was one of seven children: six boys and one girl. As a boy he helped on the family ranch, attending the family vegetable garden and shearing sheep. His grandparents were well-to-do sheep and cattle ranchers. He was two when the Great Depression struck.

The family moved from Driggs to Boise, ID in 1939 after Rod finished sixth grade. The Depression was still going and times were tough. Rod attended North Junior High and graduated in 1945 from Franklin High School. At this time, he enlisted in the Marine Corps and served for 18 months as World War II came to a close. He returned to Boise from active duty and began dating Jo Ann Bock, whom he had met in high school. They later married and together they raised 6 children: Jan (Patrick), Cindy (Ray), Randy (Jerri-Sue), Denice (Jack), Clint (Connie), and Kris (Mike). Dad has 12 grandchildren: Sean, Heather, Raymond, Nicole, Danielle, Rendell, Philip, Tylor, Sheena, Jordan, Ana, and Brandon. And 14 great grandchildren.