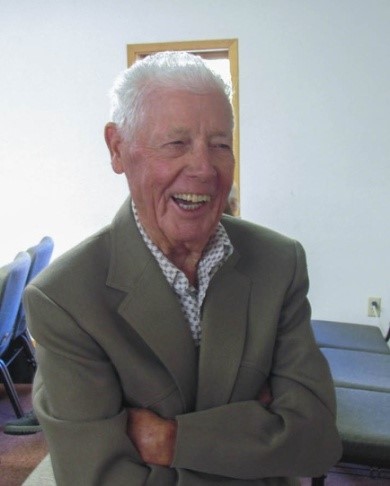 Robert Wayon Ward passed away October 19, 2021, just one week after his 94th birthday.  Bob resided at The Cottages in Middleton, Idaho, due to his struggles with advanced stages of Alzheimer’s Disease.  Bob was born on October 13, 1927, to Thurm and Arlie Ward in Yakima, WA.  He was raised with his two brothers Jack and Warren Ward.  Bob was an 8th Grade Graduate and in November of 1942, just after his 15th birthday, he enlisted in the Navy to join the fight in WWII.  He fibbed about his birth date, listing his birth year as 1925 which would make him 17 years old.  This still required a signature from his mother to allow him to join the armed forces.  He fought in WWII and was recognized as a member of Boat Pool Eleven that participated in the initial invasion of Bouganville, Solomons Islands in the South Pacific in 1943. He also received commendation as an honorable member of Admiral Halsey’s team “US Naval Advanced Base, Torokina, Bougainville, Australian Solomon Islands in 1944 at the completion of the South Pacific Campaign.  He separated from the Navy as a Motor Mechanist’s Mate and was Honorably Discharged in 1946 when he returned to Portland, Oregon and became a Diesel Engineering Apprentice.  In 1952 he re-enlisted with the US Air Force Reserve program and honorably discharged in 1955 at the end of his term.  Bob was preceded in death by his parents, wife Shirley, daughters Linda and Colleen, son Dennis, and brothers Jack and Warren.  He is survived by his current wife of 6 years Irene and his children Dan Ward, Pamela (Ward) and Rod Colton, Trent and Robin Ward, Brent and Jenny Ward, and his Grandchildren Shaylin, Kinsie, Jackson and Gabriella.

Bob married Shirley Chipman on June 16, 1961, and together they raised five children, Dennis, Danny, Pam, Trent and Brent while residing in the North End of Boise, Idaho.  Bob enjoyed his career as a Diesel Mechanic with Cummins, Kenworth Trucking, and later retired in 1985 from Management with Boise Cascade’s Trucking Division.  He went on to start his own Diesel Mechanic shop called Idaho Truck and Pickup and retired for the 2nd time in 1989.  He and Shirley built their retirement home in Round Valley, south of Cascade, Idaho, in 1992 and became full time residents.  They cherished family visits with their Children and Grandchildren as well as so many great neighbors and friends in the community.  He earned his nickname and became known to his family and friends as “Grumpy”, his bark (or growl) was usually bigger than his bite.    After 53 years of marriage, Shirley lost her fight with ALS and left Bob’s side to be with God in 2014.  He later married Irene Padgett in 2015 and was very blessed to have spent his last several years in another loving marriage.  Irene was a pure blessing to him and his family, she brought so much joy to his final years on earth.  Irene along with many extended family members, friends and neighbors stood by his side and cared for him with love, faith, and support through his illness over the past few years.

Bob loved his family dearly; he was a very proud “Grandpa” and shared his belief in God with all those who crossed his path.  He spent his years fixing anything that had an engine, enjoying the outdoors, hunting, fishing, and camping and loved sharing that with his Children and Grandchildren.  For years he was an active member of the Baptist Church in Boise and later with the Chapel in the Pines in Smith’s Ferry.

The family can’t express enough gratitude to Nicole and her staff at The Cottages in Middleton, they welcomed him into their family, cared for him, and made him feel so special and loved at a very difficult time for him and his family.

A celebration of life with light refreshments will be held on Friday November 19th at 12:00 p.m. at Bowman Funeral Chapel, 10254 W Carlton Bay Dr., Garden City, Idaho followed by a Military Graveside Service at the Boise Veterans Cemetery at 2:00 p.m.  In lieu of flowers the family would like to ask that memorial donations be made in the honor of Bob to Dream Flights, 1894 E William St. #4-451, Carson City, NV 89701 or online at dreamflights.org

A celebration of life with light refreshments will be held on Friday November 19th at 12:00 p.m. at Bowman Funeral Chapel, 10254 W Carlton Bay Dr., Garden City, Idaho followed by a Military Graveside Service at the Boise Veterans Cemetery at 2:00 p.m.