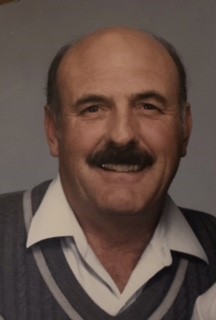 Robert Andrew Stork, 82, passed away on April 7, 2021, in Meridian, ID. He was born on September 19, 1938 to George Paul Stork and Ruby Geraldine Stork.  He lived his early life in Pasco, WA, graduating from Pasco High School and Columbia Basin College.  He worked with his Father in building homes in Pasco along with joining the Army Reserves.   He then went to work for Neil F. Lampson, Inc (Lampson International LLC) and was employed for over 35 years, retiring in 2016.    In the early years of employment, Bob traveled to many locations for the Company before settling in as a Sales Associate.  Bob also acquired OSHA Maritime Gear Certification and inspected many cranes and equipment throughout the Northwest.

Bob loved hunting and fishing, so he moved his family to Meridian, ID from Lacey, WA in 1984, where he built the family home and resided at death.  However, we all know he would rather be on the golf course than pretty much anywhere.  Although he loved golfing, he loved being with family and made sure to attend Bobby and George’s games and activities, and taking them golfing, hunting and fishing, and going with Dad on business trips and crane inspections.  We have many family memories around our Henry’s Lake Fishing Trips each year.

Many of you know the struggle Bob went through with Alzheimer’s the last few years.  I am blessed I was able to keep him home with me.  Thank you to my T1 Family and his Caregivers, Kim Shoecraft and Donna Franklyn.

We miss your laugh already!