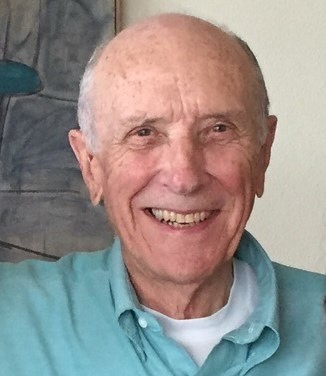 Richard was born in Hill City, Kansas on April 6, 1931. He attended high school In Boise where he was an honor student and an ROTC member.  After a year at Boise Junior College he joined the Navy.  He met Verlene on a blind date and they were married in San Diego, where Richard was stationed.  October 2021 marked their 70th Wedding Anniversary.  He was a sonar technician aboard the USS Blue (DD-744) during the Korean War.  After his service  they moved to Laramie, Wyoming where he obtained his Bachelors and Masters Degrees in Geology at the University of Wyoming.

He first worked as a wellsite geologist measuring atomic energy in Big Piney, Wyoming followed by a stint at a consulting firm in Los Angeles, California.   He worked at the Seismological Observatory in Payson, Arizona, before moving to Tucson, AZ where he earned his Ph.D. in Geophysics at the University of Arizona in Tucson. He taught as a professor at Southern Illinois University in Carbondale, Illinois, where he began a lifelong passion with the potential for computers.  He and Verlene returned to Laramie where Richard was a geophysicist and hydrology consultant for the next 30 years.  Retirement led them back to Idaho.

Richard’s greatest passion was in discovering how the earth developed its geological formations.

His adventurous nature and intellectual curiosity led him to travel extensively in all 50 states and abroad.  He visited Europe, Canada, Mexico and spent a summer in Africa mapping out agricultural design to improve water availability.  He was a great student of history – he read extensively and traced the family Ancestry back to the 1600’s.

He relished a good political debate and enjoyed computer programming and stock trading.

On the home front, his knowledge of soil and rock geology allowed him to design landscapes while Verlene managed their care.  He deeply loved his pets – Spooky, Seismo, Sarge and Micah were special favorites.  He very much enjoyed Jazz, Classical and Big Band music, and they often would be found taking in a live performance of theatre or music.

He was compassionate, tenacious, analytical, ambitious, cutting-edge, a devoted father a loving husband and a humbling presence.  He recounted many stories of his affection for his grandparents, who had a profound influence on his life.

He is survived by his devoted and steadfast wife Verlene, his sister Jolene, his children Deborah, Denise and Cheryl; his grandchildren Suzanne, Joanne, Anthony, Megan, Michelle and Jamie; and his great grandchildren Lamar, Christopher, Christina, Anthony, Joey, Sean, Alec, Mason and Isabel.

Preceded in Death by his two brothers, Roger and Eugene.