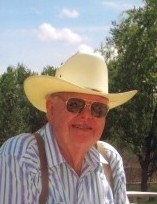 Red was born May 7th in Kuna to James L. and Nettie M. Ward.  He lived in numerous town through the valley, finally settling in Horseshoe Bend.  Red was the fourthth of five children, Dortha, Matthew, Bill and Kenneth.

In 1945, Red was hired by Spring Valley Ranch where he worked as cattle foreman for 32 years.  They lived at the ranch for 25 of those years before moving to Horseshoe Bend, living there for 35 years.  He worked for the mill in Horseshoe Bend.  He later worked for Boise County Weed Control, which he considered a great job because he only had to work six months out of the year.

Red loved to hunt, fish and be a cowboy.  He enjoyed going to rodeos and participated in local rodeos where he won a belt buckle for wild cow milking in 1978 at the Emmett Rodeo which he was very ploud of.

He was preceded in death by his parents, 3 brothers and a sister.