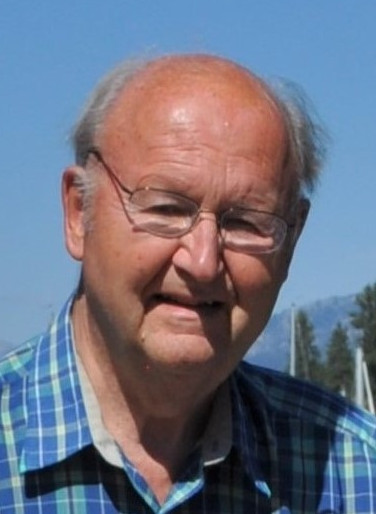 Dick was born on November 11, 1934 in Minneapolis, Minnesota, the eldest son of Iner and Elizabeth Carlson. He grew up on a farm in Sandstone, Minnesota, and he was active in Future Farmers of America and played trumpet in the high school band. After graduating from Sandstone High School, he went to the University of Minnesota, where he earned a bachelor’s degree followed by a Doctor of Veterinary Medicine in 1958 – the same year he married Lois Westafer.

After practicing as a veterinarian for several years, he went back to medical school, earning his MD degree from the University of Minnesota in 1966. He completed a one-year medical internship in San Francisco, California, followed by a surgical residency in Baltimore, Maryland. Dick (and Lois) moved to the Seattle, Washington area in 1971. He worked for the Public Health Service for two years, and then he started an otolaryngology practice in Kirkland, Washington, where he was on medical staff at Evergreen Hospital. He also envisioned and co-founded the Evergreen Surgical Center.

In 1982, he left the Seattle area and subsequently practiced medicine in Tulsa, Oklahoma, Willmar, Minnesota and Nashville, Tennessee until his first retirement from medicine in 1989. He earned an MBA degree from Eastern University near Philadelphia, Pennsylvania in 1991 (serving as campus physician while in school), after which he volunteered with several Christian organizations near Washington, D.C. and resumed part-time medical work. He was always committed to medical missions, working with several organizations in a number of countries over many decades.

He (and Lois) moved to the Denver, Colorado area in 1996 and later to Boise, Idaho in 2003. Always a lifelong learner with a passion to try new things, he later obtained a real estate license and developed a new hobby of woodworking and making pens. He was also an avid gardener who, working with Lois, created beautiful outdoor spaces in many locations.

Dick was known for his gentle manner, his compassion toward others, his deep Christian faith, his wise perspective, his personal integrity, his wry sense of humor, his tenacity and commitment to hard work, and his ‘gift of gab’ – he could talk to anyone about anything. Dick truly embraced the fullness of life and positively impacted countless numbers of people over his lifetime. He was an ‘idea guy,’ and his entrepreneurial spirit was with him to the end.

Dick is survived by his wife of 62 years, Lois Carlson, his two daughters, LuAnn Carlson of Phoenix, Arizona and Marcy Carlson (Tim Smeeding) of Madison, Wisconsin, his grandson, Finny Smeeding, as well as two brothers, Morris Carlson (Darlene) and John Carlson (Phyllis), his sister, Marlys Christiansen (Norm), and two sisters-in-law, Karen Carlson and Joanne Fahlman (Steve). He is preceded in death by his parents, Iner and Elizabeth Carlson, his parents-in-law, Bill and June Westafer, and two of his brothers, Doug Carlson and Dennis Carlson.

A visitation for family and friends will be held at Bowman Funeral Parlor on Wednesday, July 22, 2020, from 3:00-5:00pm, 10254 W. Carlton Bay Dr., Boise, Idaho, masks are required. A private family graveside service will be held on Thursday, July 23, 2020 in McCall, Idaho, and a public celebration of life will be scheduled for next summer at the Cathedral of the Rockies in Boise, Idaho, once Covid-19 restrictions have been relaxed.

A visitation for family and friends will be held at Bowman Funeral Parlor on Wednesday, July 22, 2020, from 3:00-5:00pm, 10254 W. Carlton Bay Dr., Boise, Idaho, masks are required. A private family graveside service will be held on Thursday, July 23, 2020 in McCall, Idaho, and a public celebration of life will be scheduled for next summer at the Cathedral of the Rockies in Boise, Idaho, once Covid-19 restrictions have been relaxed.