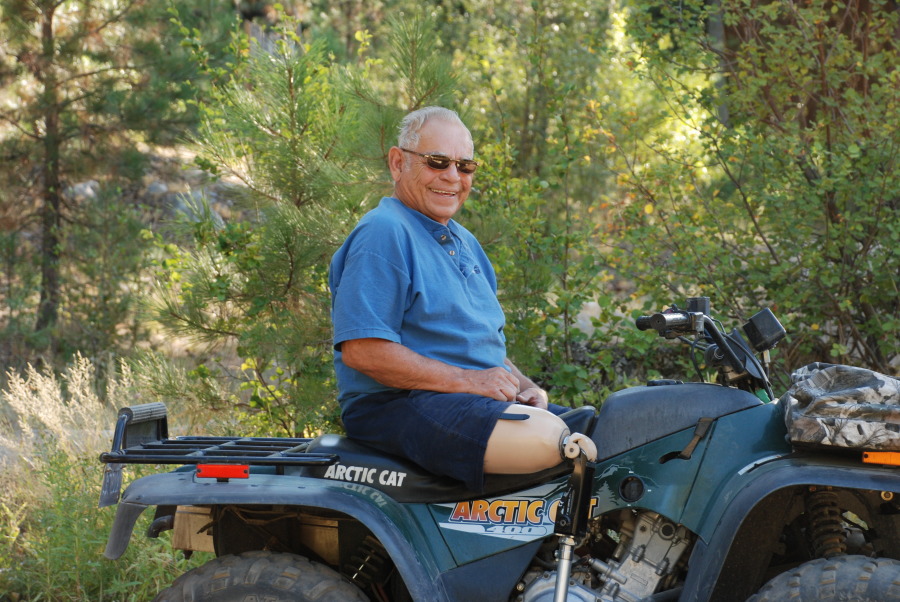 Richard “Dick” Lee Waldram was born October 2, 1939 in Boise, Idaho, to Albert and Wanda Waldram.   He was surrounded by his family in the early morning hours on December 14, 2019 at Valley View Skilled Nursing Facility in Boise, where he passed away after a long battle with health issues.

Dick attended North Jr. High and graduated from Boise High School in 1958.  He married the love of his life, Edna Diffendaffer in 1960.  Together they raised four daughters: Dee Ann Jones (Robert Nickel), Lisa Gooch, Laura (Clifton Cox), Carol (Jerry Ruhter), and have 12 grandchildren and four great-grandsons.  Dick joined the Air National Guard, worked for the Forest Service, and then embarked on his career as a heavy-duty truck mechanic where he worked for Wagner’s Trucking and United Oil in Twin Falls, Cummins Diesel in Boise, then Rangens in Buhl.  After mechanizing, he drove long-haul truck until he opened his own business in 1981, D & D Auto & Truck Repair, in Twin Falls until he retired as an entrepreneur in 1994.  There he went to work for Agri-Service as the warranty service writer until his second retirement in 2006.

After his retirement, Dick went into farm management.  He loved being outdoors and working with his hands.  His greatest joy was riding the fence line on the four-wheeler with his beloved dog, Zoey.  Even after losing his right leg, nothing detoured him from living his life to the fullest.  Dick loved camping, hunting, fishing, and the mountains.

Dick was a devoted father and grandfather.  He passed the love of nature, hunting, and fishing on to his children and grandchildren.  He cherished his hunting trips with his brothers, daughters, grandsons, and sons-in-law.  After he lost his leg, he continued hunting on the four-wheeler.  He passed his knowledge of fixing things onto his daughters and sons-in-law.  His passion for auto racing lives on in his daughters.

In retirement, Dick took up wood working.  He took pride in the work he did especially in the gun cabinets he built.  He loved to make Christmas gifts for his daughters and was anxious to see their faces when he presented the gifts to them.

Special thanks for all the compassionate care of Heart and Home Hospice and the staff at Valley View for taking such good care of Dick during the last few years of his life.  Dick was preceded in death by his parents and brother, Dean, and nephew Alan Waldram.  He is survived by his wife, children, grandchildren, sister Clarine (John Hastriter), brother Russ (Kris) Waldram, and several nieces and nephews.