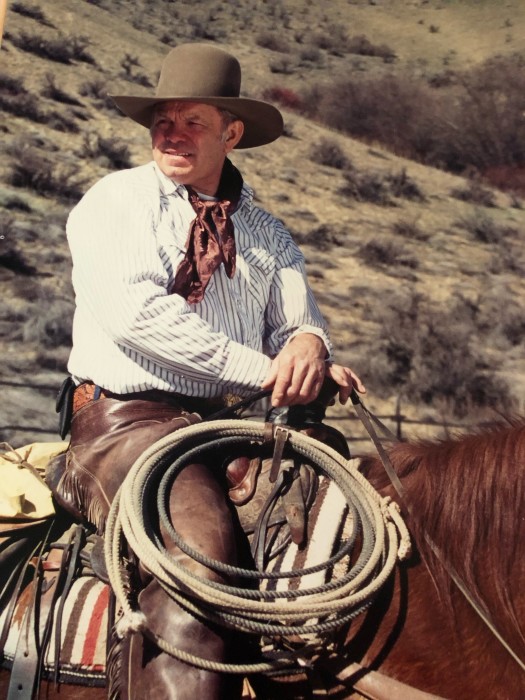 Dick was born October 26th, 1939 to Ray and Thelma Jenkins. He spent his childhood growing up in numerous Idaho towns. He was a brother to Sandy, Melvina, Duane, Dave, Todd, Debbie and Sandi.

Once Dick was old enough, he began accompanying his father into the backcountry where they guided. He would spend the next two decades returning on and off to work. His time at the Flying B Ranch and Sulphur Creek are some of the best in his 79 years.

In 1957 Dick met Sharon Walther at the Silver Spur. They married in 1958. They enjoyed many adventures, working on ranches and guiding. Dick and Sharon shared 6 children together and later divorced.

In 1966 Dick met Mirriam ‘Mimi’ Patten at the Snake River Stampede. They were married not long after. The two made their home in Grand View, and later in Boise. They had 4 children.

In 1974 Dick met Linda Donley in Banks. They would spend the next 32 years together, raising 1 child. During this time Big Gallagher Art was started. Dick became a well known western artist. They traveled to art shows in surrounding states, making their living. He built a custom log home for them that he was very proud of.

Dick worked on ranches in Idaho, California and Colorado. He also worked for JR Simplot, Gillihan’s Guide Service in Big Creek and JI Morgan. He loved horses and had a great admiration for working cowboys and the cowboy lifestyle.

Dick is survived by his children Guy (Heather), Dusty, Kelly, Wade, Troy, Shelina (Thor), Marisa, Bret and Rich (Melissa). He also leaves behind 28 grandkids and 14 great grandkids. He was preceded in death by his parents, 2 children Richard and Krista and 2 sisters Sandy and Sandi.

There will be a memorial service for Dick on June 29th, at 2:00, at Garden Valley School.