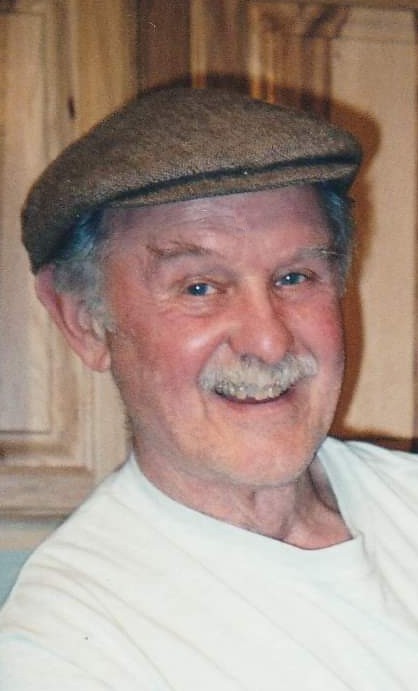 Richard (Dick) Benjamin Terry (born 4/4/38) took his last breaths on May 10th, 2019 surrounded by family while his dogwood and poppies bloomed in the yard.

Dick was nicknamed “Lucky” by his parents (Fern Opal and Norman Oliver Terry) when a 20 dollar coin fell from the second-hand dresser his Dad bought and carried for miles on foot to use as a baby cradle. Dick spent his first months in Boise living in a tent just North of the train depot while his parents worked to build a home on Roberts street.  As a 5 year old child, some of Dick’s responsibilities were to ride his bike to milk the family cow, and to ride the bus by himself down Vista to his preschool downtown. Dick described his early childhood years as “feral”, as he and his younger siblings had limitless opportunities to explore the Boise landscape without supervision. He showed early interest in the natural world as a young boy as he brought pigeon chicks home to feed with an eye dropper and his siblings recall “always having pigeons”. His pigeons would fly out to meet him when he returned from school on his bike, landing on his shoulders and riding in with him.  In early childhood, Dick also performed various tap dancing and singing routines for troops and audiences in elaborate costumes sewn with pride by his mother. Sometime after that, he was riding his bike down Americana and was struck by a flatbed truck. The collision severed the two fingers on his left hand clean off. He was left handed.  Dick had the bluest twinkly eyes and wild eyebrows to match his personality.

At school, Dick excelled in ROTC and in academics- always getting good grades.  He began smoke jumping out of McCall in 1958 during fire season and had been deeply involved in the smoke jumper community until his passing. After travelling by motorcycle to Latin America with his best friend Woody Spence and hitting a cow, Dick married Nancy Welker in 1960 and had two (2) children. Dick graduated with a Phd in Biology from the University of Illinois and spent years as a professor at the University of North Carolina in Chapel Hill. He ended his career working at the Boise Interagency Fire Center as the training center manager, coordinating wildfire training classes and other training of new jumper recruits.  He retired and lived outside Eagle, Idaho at “the farm” for over 46 years, with his wife Sharon Terry. After retirement, he took up down-hill skiing again and skied regularly until he was 78.

Dick loved to start a good project but like most, didn’t finish many. He never lost his interest in bird life, as listening to birds was one of his favorite things.  He built a duck pond and hatched eggs in his incubators, raising the ducks in a bathtub. He was a terrible pet owner but never gave up trying. He planted a massive garden yearly with food for the body and food for the soul, loved his small orchard of a few fruit trees, raised calves, collected antiques with Sharon, and read history voraciously. He was a man of the outdoors and loved to camp, hunt, fish, and just walk around his place making plans. Dick was considered to be a brilliant and kind man and passed one of these attributes on to his kids.  He also taught us that expiration dates on food were merely “suggestions”. In his later years he often teared up with emotion as he spoke about the beauty in the world. He will be remembered fondly and was adored by many.

Dick is survived by his wife of over thirty (30) years Sharon Terry, his children from his first marriage and their spouses and children, Sidney and Steve Alley of Albuquerque, John and Lynn Terry of Boise, his stepdaughter Deni Lequerica of Boise and her children and grandchildren, as well as surviving Boise siblings Sally Briggs, Rosalie Bell, Edward Terry, and Roy Terry of Santa Clara, California and their children and grandchildren. He was preceded in death by his parents, brother Patrick Terry of Hailey, and his stepson Christopher Petersen of Emmett. Dick’s family would like to thank the staff at St. Luke’s and MISTI for their compassionate care.  No services will be held at this time but a Celebration of Life will be held later this summer. Details will be announced at a future date.