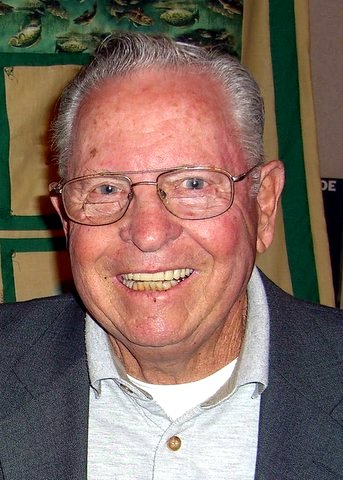 Raymond Clay Beverage was born in Omaha, Nebraska on November 1, 1926 to Frederick Clay Beverage and Edith Louise Jones Beverage.  He was raised with six sisters and one brother on the family farm in Plattsmouth, Nebraska.  He played football, baseball and ran track for the Plattsmouth Blue Devils, the local high school from which he graduated.

After his father passed away, Ray moved to Idaho in 1947 with his mother and two younger sisters.  He fell in love with Idaho’s lakes, streams and beautiful mountains.  Ray settled in Mountain Home for a time and enjoyed fishing and hunting.

Ray met Mary Elizabeth Davidson in 1954 and they were married in January of 1955.  They settled in Mountain Home where Ray did some logging with cousin Norm Petty and later worked for Fifer’s Chevrolet.  He made many friends in Mountain Home and visited with them often throughout his lifetime.  Their first son, William Clay (Bill) Beverage, was born in October of 1955, and a second son, Raymond Steven (Steve) Beverage was born in June of 1957.  The family moved to Boise in 1958 and eventually settled in the Robertson Drive subdivision where they lived for over 39 years, again, making lifelong neighborhood friends.

While in Mountain Home, Ray worked as auto parts department manager.  When he moved to Boise, he went to work for Miller Stephan Cadilac/Pontiac as it’s parts manager. He later worked for the Idaho Transportation Department as Supply Superintendent until he retired from ITD in 1984.  After retiring Ray started his own business with his wife Mary, R&M Motors Garden City on Chidden Boulevard.  R&M eventually moved to Air Base Road in Mountain Home and from there, they sold campers, trailers, boats and vehicles to many people, again, making more friends along the way.  His grandchildren remember trips to the lot in Mountain Home, helping to sweep out the office, pull weeds and naps on the desk and the bonus of stopping for soup at the Stage Stop, where the waitress became a friend of the family and knew their order before they sat down!  Ray and Mary loved camping and had a newer camper or trailer every year and enjoyed their favorite spots at Crown Point, Poison Creek, Anderson Ranch, Pine, Feather Ville and Red Fish Lake.  They passed this love of camping on to the following generations.

One thing Ray always appreciated was a really good meal with family and friends.  Stories were told of him taking the boys to Manley’s Café, an old time favorite in 60’s & 70s Boise, which served huge plates of food and half a pie with ice cream ala mode.  In his later years, one of his favorites became Goodwood Barbeque, always choosing the pulled pork sandwich!  Jackie and Terrie learned early, the way to Ray’s heart was through his stomach!  In addition to the pulled pork, he loved homemade roast beef and mashed potatoes, sweet corn, canned, or on the cob, chocolate chip cookies, German chocolate cake and of course, Mary’s cupcakes, thus, earning him the nickname from Terrie, “Cupcake”!  He never, ever turned down a dish of ice cream or a Snicker’s either!

Ray will be fondly remembered for his kindness in helping his family, his love of his family, and his quiet spirt.  He was preceded in death by his parents, his siblings, Estelle, Bea, Ruth, Chuck, Eunice, and Jeannie, his wife Mary, and his youngest grandson, John.  He is survived by a sister, Joanne, a brother-in-law, Jerry Smith, sister in law, Peggy Beverage, his sons, Bill Beverage (Terrie Havis), Steve Beverage (Jackie), grandchildren, Andre Beverage, Cherie Beverage Schimtz (Curtis) and Chad Beverage (Ashley), and five great grandchildren.

Celebration of Ray’s life will be in a viewing on Thursday, April 28th at Bowman Funeral Home from 6 to 8 p.m. and a short graveside service at Terrace Lawn in Boise, Idaho on Friday, April 29th at 1:00 p.m.  Following this short service, all are welcome to join the family for a life celebration with good food, good people, and good times at Bowman Funeral Home from 3:00 p.m. to 6:00 p.m.

Celebration of Ray’s life will be in a viewing on Thursday, April 28th at Bowman Funeral Home from 6 to 8 p.m. and a short graveside service at Terrace Lawn in Boise, Idaho on Friday, April 29th at 1:00 p.m.  Following this short service, all are welcome to join the family for a life celebration with good food, good people, and good times at Bowman Funeral Home from 3:00 p.m. to 6:00 p.m.