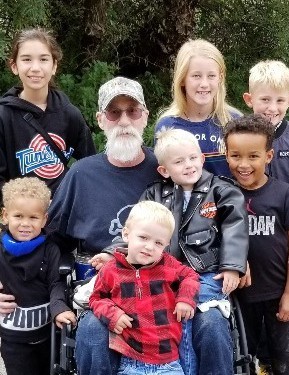 Ray Carleton was delivered from pain into the arms of the angels October 22, 2019, at his home in Kuna, Idaho – surrounded by the love of his girls.

Ray was born November 23, 1962, to Robert and Charlotte Carleton in Grand Rapids, Michigan, joining his sister, Carla and brother, Ralph.  A few years later, the family relocated to California and then ultimately settled in Boise, Idaho in the early 1970’s so they could enjoy an easier more relaxed lifestyle.

Ray graduated from Borah High in 1981 then joined the National Guard and served locally for seven years.  He then worked in the construction field for many years.

On March 1, 1990, Ray and his first wife, Tane’ were blessed with a beautiful baby girl, Courtney Leigh, and she was the light of his life.  From the moment he held her in his arms and their identical blue eyes met, she became his cherished little “Bug.”

Ray struggled with addiction from a very young age, before finding recovery in October 1995. Ray met the love of his life, Melissa, in the summer of 1998 during a 12 step recovery group activity.  Ray and Melissa were married on June 9, 2001 at the Kuna United Methodist Church. Ray gladly welcomed Melissa’s children, Mike and Sara, and together they parented and loved their blended family.

Ray experienced many challenges in his life.  After just six months of marriage to Melissa, Ray had a work-related accident which resulted in the loss of his lower right leg in February 2003.  As he was a “tough guy”, he continued working construction through 2004 until it was no longer an option. This set in motion a new direction in life for Ray as he decided to go back to school and work on getting his Certified Drug and Alcohol Counselor (CADC) credentials to help others overcome substance use disorders. With the support of his wife, children, and sponsor, Ray enrolled at BSU in the Addiction Studies course work and began working in the field of addictions.  This became Ray’s passion and true calling in life.  Beginning in 2005, he worked at Port of Hope, Supportive Housing and Innovative Partnerships, Crossroads Mental Health Center, Walker Center, Correctional Alternative Placement Program, and Pioneer Mental Health. Although Ray was devoted to his service as a drug and alcohol counselor, the private sector of that business left him stressed and unfulfilled and he felt something was missing.  He confided this to Melissa and she said, “Maybe God will open another door for you.  Let’s pray for that!”

God answered this prayer in December, 2013, with Ray’s final career destination at Boise Rescue Mission Ministries (BRM), which allowed him to pursue his desire to help people overcome the limits and obstacles of life as a Case Manager of the New Life Program. Of this new path he said, “I get paid to do the Lord’s work and give a hand up instead of a handout. And guess what?  The Mission pays weekly!  Very weakly…”

Then came a devastating blow:  In November of 2014, Ray was diagnosed with pancreatic cancer. Ray underwent an extensive surgery in which part of his pancreas and his spleen were removed along with the cancerous tumors. In the winter and spring of 2015, Ray went through 12 grueling rounds of chemotherapy at Mountain States Tumor Institute (MSTI), with his devoted Melissa by his side. During this time, Ray continued his career at the BRM to become the Manager of both the New Life Program and Veterans Ministry Program and in June 2015 he was declared cancer free.  This was joyous news and Ray and Melissa resumed their lives doing the things they loved.  They celebrated the end of chemo by purchasing a beautiful bright orange Jeep Wrangler and took many long drives together.  They also spent as much time as possible camping in various locations in Idaho, their favorite being McCormick Park in stunning Hells Canyon where they went every spring and fall.

Family was very important to Ray.  Starting in 2007 Ray and Melissa were blessed with seven beautiful grandchildren.  Becoming a grampa was one of the greatest gifts of his life.  All of the grandkids adored and worshipped their Grampa Ray – and he them.  In November, 2018 his daughter, Courtney nominated him as Seven’s Hero on KTVB and they did a feature on him on the news.  In the televised piece, his supervisor, Jacob Lange boasted that “Ray would continue serving the BRM until his last breath”.  How prophetic that turned out to be.

Then in May of 2018 – some hard news:  a diagnosis of Stage 4 metastatic pancreatic cancer. It had relapsed and tumors had grown in both lungs. He was given the diagnosis that it was now terminal and incurable. The initial prognosis was one year – so Ray and Melissa chose to take the high road and lived their lives to the fullest, continuing to travel, camp, fish and spend time with family.  Always the tough guy, Ray also chose to remain at work at the BRM River of Life and became Director of the New Life Program. In May, 2019, Ray was presented the Lifetime Achievement Award by the Idaho Conference on Alcohol and Drug Dependency (ICADD). That same month Ray was also honored with a special award by the Boise Rescue Mission at their yearly New Life Program graduation ceremony.

In June, 2019 tests revealed the cancer had spread to other organs.  Ray and his wife continued their activities despite his increasing pain and weakness.  Ray and Melissa began Hospice care in late September.  Ray continued to work as much as he was able, and his final day at the BRM was Monday, October 7th. His final wish was granted with their last trip over the weekend of October 11-13.  They traded their beloved orange Wrangler for a more comfortable Jeep Cherokee Trailhawk and traveled to the Wallowa Lake area where they rode the Eagle Cap Excursion Train, enjoyed time with new friends, and drove home the long way through Enterprise and Joseph, up over the mountain and back through Hells Canyon – Ray’s favorite place.  The week after this trip, the cancer took over and Ray deteriorated very quickly.  His final days were spent at his home in Kuna, being cared for by his devoted wife, Melissa and her team of Amazon Warrior Women – his daughters, Courtney and Sara and his sister, Carla; and surrounded by his loving family and close friends.

He was preceded in death by his grandparents on both sides, cousins Wes and Rob Swanson, and uncle Roland Swanson.

Ray was a Real Man in every sense of the word: Tough Guy, Soldier of Faith, True Disciple, Recovery Warrior, Jeep Lover and first and foremost, devoted husband, father, brother, son and always and forever, Grampa Ray.  The light of the world will be forever dimmer without him in it.  We know in our heart of hearts that Ray has been delivered from pain, conquered the evil of cancer, and is now hiking and running on two legs and Jeeping with those who went before him, while smiling down on all of us from Heaven with those twinkling blue eyes.

Melissa and family give heartfelt thanks and praise to the everyone at the Boise Rescue Mission Ministries, the caring staff at St. Luke’s Center for Pancreatic and Liver Diseases and Mountain States Tumor Institute; and the team of angels at First Choice Hospice.

There will be a public Celebration of Life Memorial Thursday, October 31, 2019 at 10:30 am at the 10 Mile Christian Church, 3500 W Franklin Rd., Meridian, with refreshments to follow.

In lieu of flowers, please make a donation to the Boise Rescue Mission Ministries.