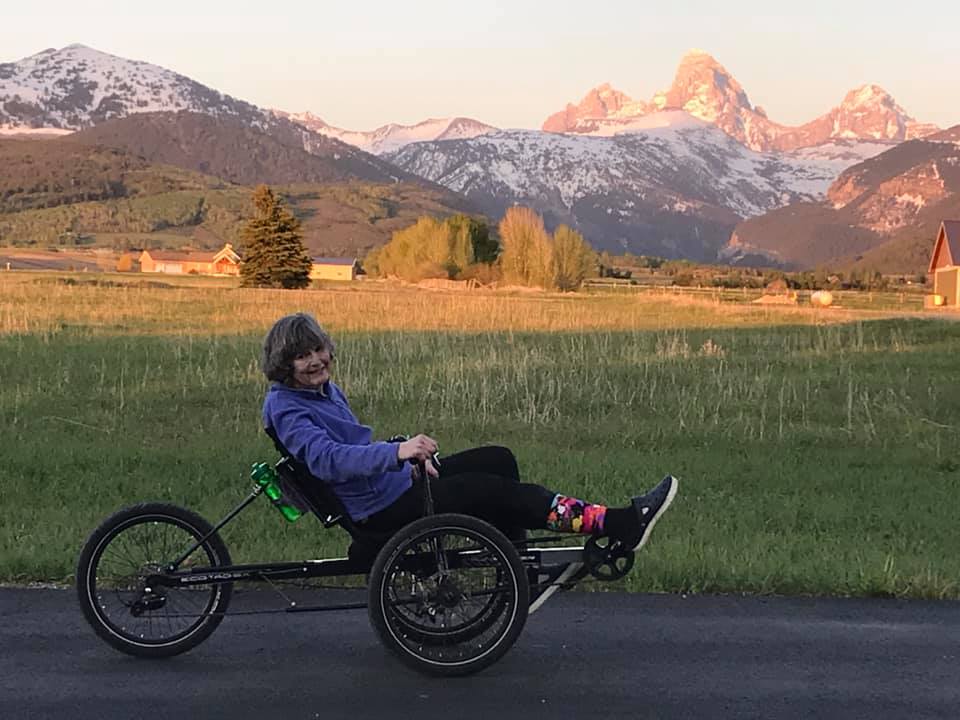 Pamela “Pam” Jane (Moore) Booth, beloved wife, mother, sister, grandmother and friend, passed away at a care facility in Boise, Idaho in the early morning hours of June 10th, 2021. She was 71-years-old. Pam was surrounded by her son, two daughters, and her husband of 48 years. Her 30 year battle with Parkinson’s Disease has ended, but not without a valiant effort on her part to push through many years of mounting struggles, pain, and loss of her independence (and ability to gamble whenever she wanted to!). Pam was born on December 6th, 1949 in Minneola, NY, the first of four children of Robert & Patricia Moore. Her childhood was spent primarily out east, with one of her favorite places being the Outer Banks off the coast of North Carolina, and Sandbridge on the Virginia coast, where her family had a beach house until 1974. She and her two brothers and young sister enjoyed many summers of salty sea air and sandy beaches while making a lifetime of memories. Pam’s father’s work led them to move from Norfolk, VA to St. Louis, MO when Pam was in high school.

Pam met her longtime love, Tom Booth, at a swimming pool in St. Louis when they were both in high school. It’s a foggy recollection, but Tom is pretty sure his brother and one of Pam’s brothers made sure they met. They dated for seven years while they both finished high school and completed their undergraduate degrees at University of Missouri in Columbia, MO (go Mizzou!). Pam earned a degree in physical therapy and would eventually enjoy a career in the field. They married in St. Louis on May 19th, 1973, just as Tom was beginning medical school at Kansas City University of Medicine and Bioscience (KCUMB). They welcomed their first child, a son, in 1974 (surprise!). Pam liked to say Brian was raised by Sesame Street and willing babysitters while she worked and Tom pursued his medical degree. (We think he turned out okay.) The family moved to Maine in 1978, where Tom served three years with NHSC at a rural clinic in northern Maine. They welcomed their second child, Carly, in 1980. Tom and Pam consistently verify the story that Carly was the only “planned” Booth child. Their years in Maine hold memories of good friends, good seafood, and dealing with a flooding home nearly every time it rained. Also, Tom broke his leg while skiing in Maine, which made getting Pam to the hospital while in labor rather difficult.

In 1981, the Booths moved to Havre, Montana, where Tom began his career as a Family Practice physician with the Havre Clinic. In 1982, they welcomed their third child, Alison, and Pam had her hands full with two girls just 25 months apart, and an active young son. The baby of the family, Alison has proven to be the most mature of all three children, at every age. Pam would continue her career as a physical therapist with Northern Montana Hospital after spending a few years at home with the kids.

Always active, Pam’s hobbies included racquetball, chasing children, pottery, sewing (she made the girls’ clothes, Halloween costumes, holiday decorations, and more), crafting, hosting kid’s birthday parties, all things chocolate, date nights with Tom, kicking back with good friends, traveling (especially to the ocean), and attending St. Jude’s Catholic Church regularly in their early Havre years. Pam also loved fishing, and it was one of their favorite things to do together as empty-nesters. Pam and Tom developed lifelong friendships in Havre, through the hospital, Tom’s slow pitch softball league, and through their childrens’ many activities, including Odyssey of the Mind (which she coached), Brian’s high school tennis, Alison’s cheerleading and volleyball, and the girls’ involvement in band, choir, and drama in the Havre community. Always big supporters of the arts, Pam and Tom continued to support and attend local theatre performances in Havre, and traveled to Fort Peck and Virginia City to see shows, even after their kids were no longer performing in those venues. She was able to fulfill her role as mother of the bride for her daughters, welcome and love on all four of her grandchildren, and up until about 2013, she was known for her entertaining and uncensored family Christmas letters. Pam took great joy in her children’s happiness and fulfillment, as any devoted mother would.

Pam was diagnosed with early onset Parkinson’s at age 41, although she’d dealt with symptoms for a few years prior. She was unable to work as a PT after some time, and in 2005 she had Deep Brain Stimulator surgery in Billings, Montana. This surgery gave her at least 5 to 7 years back, and she and Tom traveled, enjoyed their children, eventual grandchildren, and retired to Driggs, Idaho in 2014. Pam made her mark in the Driggs community just as she had in Havre, and has left behind many close and devoted friends who miss her dearly in both communities. She arrived in Driggs still walking, then eventually needed assistance with a cane, then a walker, and finally in a wheelchair (begrudgingly). This decline was intermingled with continued struggles, all of which Pam soldiered through, to the constant amazement and bewilderment of her family and close friends. The Driggs community and her family will miss seeing her out on her 3-wheel recumbent bicycle that Tom and Pam purchased from a business dedicated to building custom bikes for the handicapped. Her bicycle was her last piece of independence, and even though she lost her sight in 2019, she could still navigate pathways enough to go out for a ride with her care companions, family and friends. In April of 2021, her family made the difficult decision to move her to a care facility in Boise, where her oldest daughter lives. She was able to walk with assistance up until about 2 weeks prior to her death, and her last bike ride was on Thursday, May 27th.

The family would like to thank Carol Taylor, LCSW, and her staff of amazing care companions in the Teton Valley, the staff at Edgewood Spring Creek Memory Care of Boise, and the All Care Hospice team, for giving Pam dignity and love in her final years and months. The Booths wholeheartedly thank their friends and family for their outpouring of love, memories, support, and kindness. Pam was preceded in death by her parents and both brothers, Jeffrey (Linda) Moore and Christopher (Patricia) Moore. She is survived by her husband, Tom Booth (Driggs, ID), son Brian Booth (San Clemente, CA), daughter Carly (Troy) Oppie (Boise, ID), daughter Alison (Rick) Vasquez (Springfield, VA), sister Kathryn (Rockford) Reece (New Bloomfield, MO), grandchildren Brooklyn & Sonja Oppie and Ava & Luke Vasquez, beloved nieces and nephews in Missouri, and cousins in Maryland & Colorado. May flights of angels sing (and bicycle) her to rest. Her absence is painful and vast, and she will be dearly missed.

A memorial celebration is planned for August 7th, 2021 at Prairie Farms Golf Course in Havre, MT at 2 PM. Bowman Funeral Home of Boise, ID is entrusted with Pam’s cremation and online memorial messages (bowmanfuneral.com). Donations in Pam’s memory are welcome to an organization of choice. Pam was inspired by the Michael J. Fox Foundation (https://michaeljfox.org), and appreciated the support they received in Driggs from Seniors West of the Tetons (www.tetonseniors.org). The family plans to scatter Pam’s ashes on the coast of North Carolina in the summer of 2022, per her wishes.

A memorial celebration is planned for August 7th, 2021 at Prairie Farms Golf Course in Havre, MT at 2 PM. Bowman Funeral Home of Boise, ID is entrusted with Pam’s cremation and online memorial messages (bowmanfuneral.com). Donations in Pam’s memory are welcome to an organization of choice. Pam was inspired by the Michael J. Fox Foundation (https://michaeljfox.org), and appreciated the support they received in Driggs from Seniors West of the Tetons (www.tetonseniors.org). The family plans to scatter Pam’s ashes on the coast of North Carolina in the summer of 2022, per her wishes.