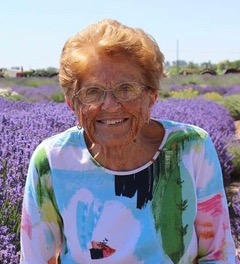 Norma met Norman Ray Stock during high school but their relationship did not get serious until after they graduated.  They were married October 15,1948. During their more than 50 years of marriage, they traveled the world for Ray’s job and for pleasure. Ray passed away on January 31, 2001.

They moved to Fullerton, CA in September of 1957 and she resided there until 2005 when she moved to Touchmark in Meridian, ID to be closer to family. Norma and Ray enjoyed many years of winters in Sun City West, AZ after his retirement. Touchmark was Norma’s home for many years living first in her own cottage, then Assisted Living and finally Memory Care, where she peacefully passed away from the complications of Alzheimers, the same disease that took her mother in 1973. She will be remembered as a wonderful nurturer, a great homemaker who enjoyed reading, traveling, sewing and decorating her house, and also taking care of her 5 grandchildren.

Norma was predeceased by her husband, N. Ray Stock, and her daughter, Denise A. Stock Mendoza.

Norma leaves behind 4 great-grandchildren, Anna and Bowman Lyon, and Weston and Hollis Stock.

A graveside service will be held, 10:00 am, Friday September 6, 2019 at Loma Vista Cemetery in Fullerton, CA