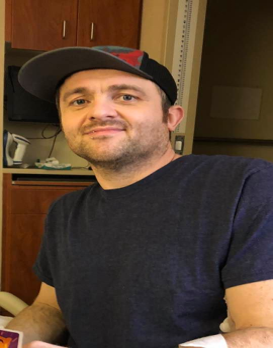 Michael Joseph Burns (Mike) aka “Monte”, 37, of Vale, Oregon, made his journey home to his Heavenly Father Thursday, February 20, 2020, surrounded by his family. His battle was short with cancer but ultimately a bigger battle was won as he is now rejoicing in Heaven, free of any cancer or mental or physical impairments.
Mike was born on May 24, 1982 in Boise, Idaho to Connie Bailey and Bill Burns his mother remarried to Kevin Bailey to who Mike from that moment on called Dad. He was raised a majority of his childhood in Michigan until High School where he moved to Nyssa, Oregon to live with his Grandma Paula Killian, to whom he remained the entirety of his life close with. He enjoyed wrestling, music, playing in a band him and his friends formed FUR, camping, and playing board games and video games with all his little nephews and niece
Mike was still young and although he did not have a chance to have children himself he was never short of the bond or love that came with fatherhood as the closeness that him and his cousin/best friend Niki Petty shared allowed him to be a constant role and part of her four sons (Landyn aka Lui, Gavyn aka Gavenia, Masyn aka Mario and his little man Ethyn to whom he called EAP) life’s like they were his own, their bond was unbreakable and there was not anything he would not do for them.
Mike was always a free spirit, living life, enjoying it and not afraid to sing out loud to the music, he loved family get togethers and holidays especially, how they ended, in always playing cards, dice and pool with his family to which was very large some of which included his Aunts, Uncles Grandmas, Sisters, Nephews, Niece and cousins.
Mike is survived by his mom Connie, dad(s) Kevin and Bill, his Grandma Paula Killian (Michael), Great Grandma “Ma” fka Beverly Hasselbach, his five sisters and brother-in-laws; Angela Chavez (Jesse), Melissa Bailey (Rex), Kayla Long (Drew), Krista Hytrek (Brett) and Karley and all his nephews and niece he was blessed with through Angela (Jesse); Brandon, Anthony and Natalie that he bonded with so closely since their births forming tight bonds of friendship as they enjoyed and shared bonding on many things especially their scary movie splurges. Niki Petty his cousin/best friend and her four sons named above who also called Mike, Uncle. Mike having such as large family leaves behind many other cousins, uncles, grandmas, friends and aunts some of which he was particularly close with Aunt Sandy (Mom), Bobette, Tammy Remick (Uncle Tommy) and Gretchen Remick.
Mike’s funeral service will be held Tuesday February 25th, at 12:30 PM at the St. Patrick’s Catholic Church in Vale, Oregon.

Mike's funeral service will be held Tuesday February 25th, at 12:30 PM at the St. Patrick's Catholic Church in Vale, Oregon.