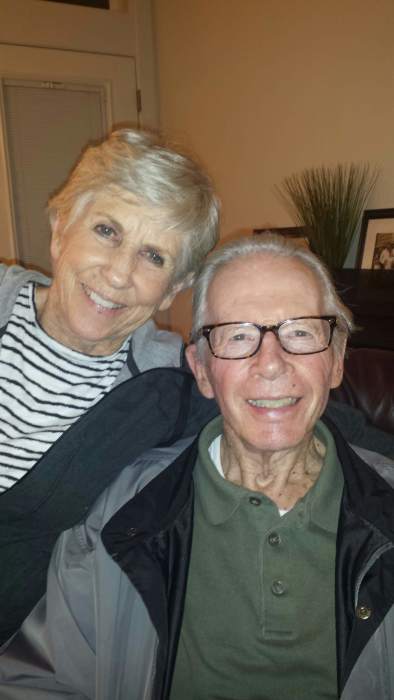 On July 20, 2019 Michael Dale Wasden, dedicated husband and father of five children, passed away at the age of 84 from causes related to Parkinson’s Disease.
Mike was born on April 13, 1935 in Las Vegas, Nevada to Howard Adolf Wasden and Virgie Leola Sorenson. He received his BS degree in Industrial Arts from Brigham Young University in 1958. Mike was a faithful member of The Church of Jesus Christ of Latter-day Saints. He married the love of his life, Helen Lynette Eyring from Berkeley, California, on January 27, 1964 in the Salt Lake City Temple.
He was a man of various careers throughout his life. He taught high school and junior high for 11 years, built and remodeled homes, and ran a successful concrete pumping business. His entrepreneurial spirit also led him to dream up and pursue many side business ventures including glass-encased butterfly stills, raising birds, carpet cleaning, and health/nutrition publications.
Mike was resourceful and skilled with his hands and able to fabricate or repair just about anything. He welded his own wood burning stove, designed and built a camper and even built his own kayaks, paddling them through river rapids and ocean surf.
Mike was an avid BYU sports fan, and loyally cheered on his alma mater throughout his life. His gift of gab and quick wit made him many friends. Even in his later years as he suffered many physical pains, he could still lighten the mood with a witty one-liner. His love of dancing and a good beat brought him to his feet and onto the dance floor. If he fancied you a good dance partner, you were never forgotten and were periodically given high praise.

Mike had a lifelong passion for learning. Much of his time was spent researching natural health remedies and testing them on himself and any willing (or semi-reluctant) participants. For anyone with ears he was ready to share all his knowledge on any topic. On many occasions, an unsuspecting visitor had to be rescued by his children as he used his proficient gift of gab. One of his children was once heard saying, “Dad, you’ve been talking for an hour straight. Let him go!”
We will deeply miss our father, grandfather, husband, brother, nutritional consultant, dance partner, handyman and friend. We know that he is being welcomed home by many family and friends who have been anxiously awaiting his return.
Mike was preceded in death by his parents, an infant brother, Howard Alan, many beloved aunts, uncles and cousins, and a best friend, Jim Huish.
He is survived by wife, Lynette, children David (Kathy), Benjamin (Tasha), Spencer (Melissa), Courtney Rice (Ray), and Wendy Bernards (Chad). He is also survived by sisters Alyce Wasden (Tom Trego) and Melody Smith (Lin), 19 grandchildren, 2 great-grandchildren, many cousins, as well as a best friend, John Huish.
Funeral services for Mike will be held on Saturday, July 27, 2019 at 7200 Duncan Lane, Boise, Idaho. There will be a viewing at 10:00 AM and the funeral at 11:00 AM.