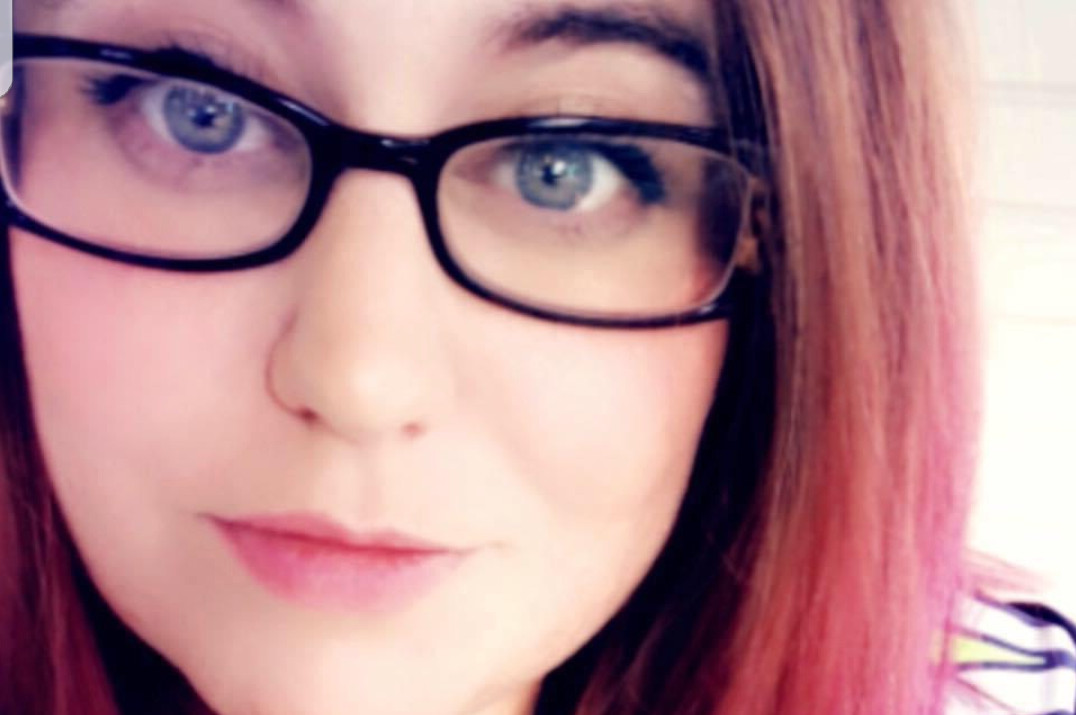 When Merideth arrived in this world, she did not make a peep. She simply looked around the room in wonder. The doctor immediately said, “Oops, I think I gave her a haircut.” She was born with a full head of hair, but a chunk was missing. Her Grandma and Grandpa Rehklau had flown in earlier that day from California, and the first words out of her Grandpa’s mouth were, “She’s perfect, just perfect.” And he was right. We had the perfect little girl to accompany big brother Michael on life’s journey.

Although Merideth did not cry when she was born, she soon made up for it with two-hour scream fests each night for the first three months. We never knew what was wrong. We only knew that if we tried to rock or cuddle her, she screamed even louder! Outside of her nightly protests, she was a happy, smiling baby in awe of her big brother. From her baby swing, she would continually stare at him with those beautiful, big eyes. Michael would eat up the attention and perform all sorts of antics to get his baby sister to laugh and smile.

The bond between brother and sister was tight from the start. The goal was to annoy each other as often as possible – a habit that lovingly continued into their adulthood. We fondly remember Merideth’s famous, “Bommbby, Michael’s looking at me!” Our reply? “Michael, stop looking at your sister.” Because this usually happened on a road trip, we did not find out until later that Michael was making strange googly eyes that freaked Meredith out!

Then there was the infamous…magic trick. Unbeknownst to her parents, Merideth tucked herself into a large cardboard box, while her brother stabbed the box with a knife. To her parent’s horror, Merideth jumped out of the box with a dramatic, “Ta da!” Shenanigans continued when Michael pushed Merideth down the hall in a plastic shopping cart. Merideth fell out and broke her arm. It was the cast on Merideth’s arm that summer that shut down sibling rough housing…for a time.

Our happy little girl could sure make us laugh. She insisted on wearing a turtleneck sweater for kindergarten photos when it was 100 degrees outside. And when she was told there were still corn kernels left on her corn cob, she didn’t miss a beat with, “I don’t want to eat the bone.” And we can never forget the day she came home from school (1st or 2nd grade) and declared her name was no longer Merideth. It was Ginger. And she made it clear that she would only answer to Ginger going forward. We are not sure what prompted the name change, but thankfully the phase only lasted a short while. Her dad started calling her “Gingus” instead of “Ginger,” and that became a family joke for years. The nickname almost stuck!

The joy Merideth brought to her Grandma and Grandpa Rehklau was immeasurable. She would run out to greet them with smiles and laughter when they picked her up for an orthodontist appointment, violin lessons, or basketball practice. She also spent lots of time at her Grandma and Grandpa Thomason’s cabin at Terrace Lakes in the summer – swimming and learning how to drive the golf cart with her cousins. There are many loving memories with both sets of grandparents, who were delighted with this happy, cheerful little girl.

Art was a passion of Merideth’s from an early age, and we all concluded she inherited the talent from her Grandpa Rehklau. Although she played some soccer and basketball in grade school, she preferred to work on art projects and sewing. But, like many Thomason’s before her, she got the music bug and took violin lessons for many years, moving to second chair in the Boise Philharmonic Youth Orchestra. Just last Christmas, Ryan had her violin restrung, as she was interested in picking it up again.

After graduating from Bishop Kelly High School in 2001 and attending Boise State University for a year, Merideth left home to attend art school in Seattle. Our hearts were broken and worried to see her venture out on her own in such a large city. But Merideth would dispel all fears with, “Oh, Mom, don’t worry. I’ll be alright.”

In 2006, while waitressing and bartending in Seattle, Merideth met the love of her life, Ryan. In 2007, she graduated from college with a dream-come-true bachelor’s degree in graphic design. In 2008, friends and family gathered as Merideth and Ryan sealed their love for each other in a lovely wedding at the home of Merideth’s mom and stepdad, Jack. The wedding spoke to their personalities. “Bless the Broken Road” was sung by Merd’s cousin, Khrys. Mexican food and margaritas were served to their guests. And a chamber orchestra played in the background because Merd was adamant: NO DANCING! A beautiful event for a beautiful couple.

In 2011, to the delight of family and friends, Merideth and Ryan moved back to Meridian, Idaho, with their two cats, Meow Meow and Rampage. After settling into their first home, they soon added their first pup, Axl. Tater, a rescue from Fuzzy Paws, joined the family a couple of years later. A third pup, Cami, joined the family in 2016.

An avid Seattle Seahawks and Boise State Broncos fan, Merd was delighted when she won the Kenaston family Fantasy Football challenge two years in a row! She loved a good football party at her mom and Jack’s house and was a collector of NFL jerseys. Last year, she finally got one with her name on it! Football without Merd…will not be the same.

Merideth loved all holidays, but especially Halloween (because it was close to her birthday) and Christmas. Christmas decorations always went up the day after Thanksgiving in the Kenaston household, and after moving back to Boise, Merd would always help her mom decorate. From the time Michael and Merideth were born, Grandma and Grandpa Rehklau would give each of them tree ornaments every Christmas that reflected the kid’s interests. Each one had the year written on it in Grandpa Rehklau’s recognizable handwriting. As an adult, Merd would take each ornament out of the box, read the year, and reminisce about the various themes of each ornament. This past Christmas 2019, Merd helped decorate her mom’s tree, even though she was recovering from a tonsillectomy and did not feel well.

Friends, family, and co-workers leaned on Merideth during difficult times. She knew she could not fix heartache or problems, but she would show up…and she would listen. Her wisdom made her an “old soul” at a young age. And when her mother-in-law, Becky, was in hospice care, Merd went to see her every day to help in any way she could, while also working a full-time job. She would sit with Becky, bathe her, comb her hair and hold her hand. The day would end with her calling her mom, crying. This was a lot of sorrow for a young woman, as she was also dealing with the passing of her Grandma and Grandpa Thomason, the declining health of her Grandma and Grandpa Rehklau, and the sudden loss of her cousin, Melissa. When her beloved stepdad, Jack, passed in 2018, and then her Grandma and Grandpa Rehklau left this world several months later, Merideth spent hours helping others cope with the losses. She was grieving and her heart ached, but she tried to ease her pain by supporting others who were hurting.

Because of Merideth’s artistic talent, she had the difficult task of creating memorial bookmarks and pamphlets for family members and friends who passed away. The task was emotionally draining, but she felt honored to make that contribution.

In 2018, Merideth and Ryan sold their home and built a new dream home in Meridian. They had fun planning the home, picking out finishes, and watching the house take shape. Earlier this year, Merideth was already talking about the next building project!

Merideth focused on pleasing others and bringing happiness to those around her. Even from a young age, we knew Merd (Merdi, Mer) would be a life-long rescuer of people and animals. It was a gift she willingly and compassionately brought to the world. She would not only grow into a beautiful woman, she would become a beautiful soul who was kind to all, thought the best of everyone, gave people a second (and third…and fourth…) chance, and placed judgement on no one. She was an inspiration and a guiding light.

Losing Merideth unexpectedly has left a gaping hole in the hearts of all who love her. She leaves behind her husband, Ryan; brother, Michael; mom, Phyllis; dad, Jeffrey; stepbrother and sister-in-law, Hans and Allison Adkins; best friend, Jessica, and numerous cousins, aunts, uncles, friends, co-workers and admirers.

Merideth is preceded in death by her mother-in-law, Becky; father-in-law, Cameron; cousin, Melissa; stepdad, Jack; uncle, Patrick, and both sets of grandparents.

We want to thank all of our loved ones and friends for their support during this difficult time. It is hard to imagine how we will move forward without Merideth’s wit, smile, laughter, funny posts on Facebook, text messages and long phone conversations. We will carry with us Merideth’s favorite saying, “Let your smile change the world, but don’t let the world change your smile.”

You are in our hearts forever, Merd, and we will do our best to continue your legacy of love, compassion, unconditional acceptance of others, and your caring heart for animals.
Contributions in Merideth’s honor can be made to Meridian Canine Rescue. A celebration of Merideth’s life will be held in the fall of 2020.

A celebration of Merideth’s life will be held in the fall of 2020.