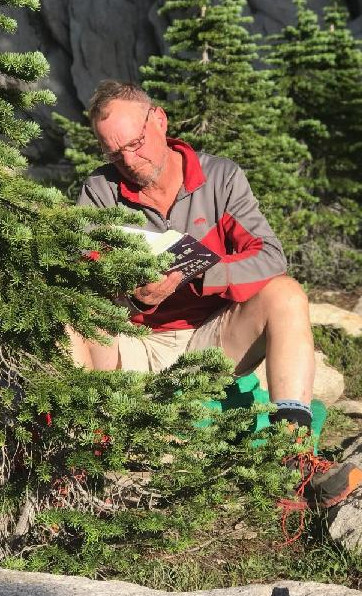 Mat Slater passed away at his home on Monday November 2, 2020.  Mat was born on June 28, 1958 in Mount Baldy California to Harvey and Rachelle Slater.  After graduating from high school Mat attended two years of college at BYU and then moved to Salt Lake City where he completed a degree in psychology at the University of Utah.  After graduation Mat moved to Boise to pursue his lifelong profession as a hair stylist.

Mat worked for over 25 years at Grabers Hair Salon where he developed a legendary and loyal clientele.  Mat’s Christmas parties for his associates and clientele, at his home on the top of hill were fabulous.

While working at Grabers he also was a consultant for Aveda Hair Care.  While at Aveda, Mat taught hair coloring techniques in the United States, Europe, and Japan.  Mat particularly enjoyed his frequent trips to Japan and learned enough of the language to enjoy Tokyo without a guide. To the very end Mat’s voice mail greeting was in Japanese.

In the last decade Mat opened his own stylist shop in the old Owyhee Hotel where most of his clientele followed him.  He genuinely enjoyed having his own business which allowed him more free time to ski at Tamarack in the winter and hike the Sawtooths in the summer.

Mat had a true passion for the Idaho outdoors and for the past 35 years had a cabin in Atlanta Idaho where he would spend a good part of his summers.   Mat made some of his closest and dearest lifelong friends in Atlanta.  His happiest times were his hiking treks in the Atlanta area with his friends, family and his loyal and trusted dog, Chance.

In 1992, along with his close friend Carol Brassey, Mat started what the neighborhood referred to as Birdseed Park.  A flower garden on a quarter acre plot close to his home.  In 2017, Mayor Bieter awarded Mat the Boise Good Neighbor Award.  The Mayor’s award stated, “Mat turned an undeveloped lot into an wild and wonderful spot, covered with lights in the dark days of winter, and filled with flowers, bird feeders and an unlikely assortment of whimsical objects throughout the year.”

As late as a week before his passing Mat was working on the design of the 2020 Christmas light display for Birdseed Park.  Everyone in the neighborhood and beyond appreciated Mat’s year-round commitment to Birdseed Park.

Mat’s calm demeanor and tireless work ethic.  He also worked to develop and maintain the trail system in the foothills.

Mat was preceded in death by his parents Harvey and Rachelle and his sibling, Janelle.  He is survived by his brothers, Doug, Phil and Harvey and sisters, Sharyn, and Laurie.

The family is appreciative of the care given by St. Luke’s Hospice.