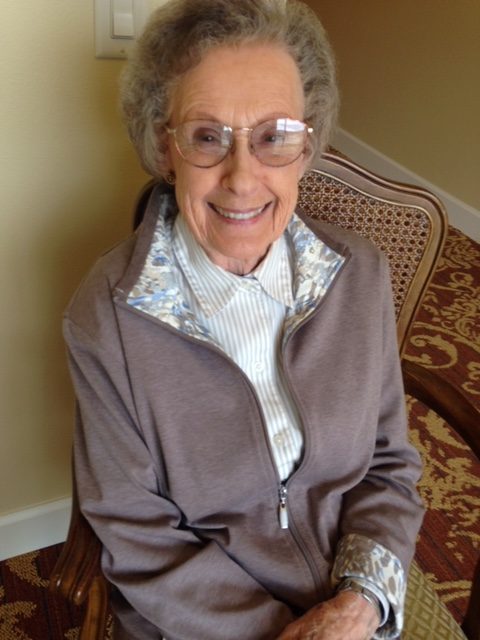 Mary Jo Walker Newcomb passed away quietly from complications of Alzheimer’s on June 21, 2020. She was buried in a graveside service for family in Meridian Cemetery next to her husband, Hugh. Though neither died of COVID-19, the world pandemic deeply impacted the end of their lives. After being inseparable for 71 years, they had to live apart from one another due to illness. Hugh died March 30, 2020 and Mary Jo died 2 ½ months later.
Mary Jo was born December 20, 1929 in Brockwell, Arkansas at the start of the Great Depression. She was the first of two children born to Verl and Wilma Walker. She attended first and second grades in Violet Hill, Arkansas. At age seven, her family moved to Fort Collins, Colorado. By her sixth-grade year, they had relocated to Illinois. She graduated from high school in Grayville, Illinois, the prom queen of her senior class. At seventeen, she enrolled in Harding College in Arkansas, where she met her future husband Hugh. They married Dec. 31, 1948.
Hugh and Mary Jo moved to Davenport, Iowa, where he attended Palmer College of Chiropractic. After his graduation, they spent time in southern Arkansas, then settled in Crossville, Illinois where Hugh set up practice. Later, he worked in the oil industry, and his career would take them to Henderson, KY, Tulsa, OK and southern California. Between November of 1949 and February of 1953, they had three children. Mary Jo was a devoted wife and mother, sewing clothes for the kids, cooking fabulous meals, keeping a spotless house and being active in their church. Her apple pies were legend. When time allowed, she did beautiful needlework, and she loved to explore antique stores with friends, which she called “going junking.”
Hugh’s retirement brought them to Boise, ID to be near grandchildren. They were faithful member of the Linder Road Church of Christ in Meridian for over twenty years. She is preceded in death by her parents Verl and Wilma Walker, her brother Morris P. Walker and her loving husband Hugh. She is survived by daughter Linda James of Columbia, Tennessee; son Gary Newcomb of Boise; daughter Kathy Harris and son-in-law Randy Harris of Boise; seven grandchildren and thirteen great-grandchildren, and sisters-in-law, Billye Dow Newcomb and LaDonne Walker.
The family is grateful for the attentive, loving care of the staffs of The Terraces of Boise and Keystone Hospice. A video tribute to Mary Jo will soon be available at www.bowmanfuneral.com . In lieu of flowers, the family asks that you consider a memorial donation to the Hugh and Mary Jo Newcomb Endowed Scholarship Fund: Harding University, Advancement Office, Box 12238, Searcy, AR 72149.