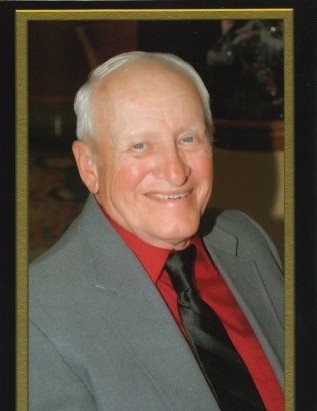 He attended several Boise elementary schools, North Jr. High, and graduated from Boise High School in 1954.  He then attended an Air Force technical school through the Idaho Air National Guard, which he joined while in high school.  Upon returning to Boise, he attended Boise Junior College.  After deciding that college was not his forte, he opted for a 4-year tour of active duty with the U.S. Air Force.  His dreams of world travel were dashed when his last assignment was to Mountain Home Air Force Base.  But all was not lost, because while stationed there he met and wooed Marylea “Sandy” Sanford of Fairfield, ID.  They were married in 1958 and he and Sandy raised their four lovely daughters.  Upon discharge he rejoined the Idaho Air Guard and soon was employed as a full-time technician.  He served in several capacities including base photographer and as a photo journalist, later adding the title of Base Newspaper Editor.  Additionally, he wore “several other hats” such as being a member of the Idaho National Guard Color Guard where he performed at ceremonies such as the Governor’s Inaugurations and balls and other official Idaho Guard functions.  As a technician and Idaho Air Guardsman his military career spanned over 40 years.  During his career he received many accolades for his work.  He was the writer and editor of an award-winning “40 Year History of the Idaho Air National Guard” and was named National “Military Journalist of the Year” for 1993, the same year he retired.

Mac’s wife, Sandy, of 56 years passed Nov.28, 2014.  Mac will be remembered by his children, grandchildren and great grandchildren with love.  With his adventurous spirit, wit and sense of humor he made lasting memories that his family will forever hold dear.  Fond memories of Mac include his arriving home from work and announcing a trip that night to his constant nicknaming people in the family to his incessant correction of peoples’ speech.  His presence, knowledge and puns will be forever missed by his family.

Mac, being an important cog in organizing the Boise High Class of ‘54 reunions became re-acquainted with former classmate, Virginia “Ginger” Bruce Wilkerson and became part of the nucleus of a group of BHS grads who became actively engaged in the world cruising scene in their later years. Mac and Ginger were married July 30, 2015 to begin a new life together.  Ginger says “Although we weren’t promised longevity, we shared four wonderful years together.  The memories of us were happy ones, with you smiling down at me with your piercing beautiful blue eyes.  That’s how I’ll remember you my Mackers.”