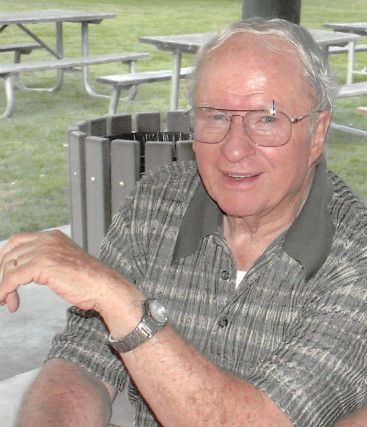 Ludwig “Louie” Pfleger Jr. was an only child born to Ludwig Pfleger  and Maria Momper Pfleger, on March 3, 1926. He was born at the St Luke’s Hospital.  His parents were German immigrants who came to America to stay in 1921.  In his early years he went by Junior and all of his relatives called him Junior. He attended the old Maple Grove grade school, North Junior HIgh and Boise High School. He played Junior Legion baseball for the Junior Pilots and he said he would ride his bike from his parents farm out on Maple Grove down to the Fort Boise field to attend practice. He was a pretty good pitcher and would play the outfield when not pitching. I found one old newspaper article that said he struck out 10 batters in one game.  He also pitched for various Navy teams.

Our dad joined the Navy after his junior year of High School at Boise High so he didn’t graduate but he was given an honorary diploma roughly 50 years later with all for his Boise High classmates that didn’t graduate because of WW2. June 24,1944 was his induction date.  He liked going to the LDS church dances back then like most young people because he said they had the best bands and he loved to dance.

Louie took basic training at Camp Farragut and then completed Cook and Bakers school and joined the LDS church on October 31, 1944. His father was employed as a baker and Louie continued that family interest. Some of Dad’s favorite German foods were prune cake, red cabbage and potato pancakes.  He would always make multiple prune cakes so he could share with anyone that wanted to try it. He also taught any grandkids that were around at that time of year how to slice the prunes just right and put them in the batter.

He was passionate about dancing, Lions Club, Church  athletics, hunting and insurance. One of his favorite things to do was to teach granddaughters how to swing dance.

He owned a bakery in Cascade right after the war and started his Farmers Insurance Agency in 1950. He showed up for the interview with Farmer’s in his bakery apron and almost didn’t get the job because he didn’t look professional.  He learned from that and always made it a point the rest of his life to dress nice.  He qualified for the company’s highest award, The Presidents Council, for 7 times and worked for them for about 48 years, always one of the top agents in the state.

Nada and Louie were blessed with 5 kids. Brent in 51, Kurt in 53, Keith in 57, Louise in 1960,and Phil in 1964. He has 20 grandkids and 41 great grandkids and there are also 3 in transit. He would always say families were manufacturing tricycle motors.

Dad was a member of the Lions Club for over 65 years and held most positions in the local club but loved being the membership chairman. It was his responsibility to recruit new members to the club and he was good at it because he sold the sizzle, which means he didn’t just ask someone if they wanted to join the club but he asked them if they wanted to join a service organization that would benefit the community and help individuals in need. How could you say no to that?

Dad played on and coached many sports teams over the years, softball, volleyball and basketball. I remember him being my coach from the time I was in primary until I was married.

Among other things he would always coach his players to use two hands when catching the ball even if it was an easy catch because they weren’t Wille Mayes, And he would always tell the story of the game his team lost because all someone had to do was catch an easy fly ball and they dropped it because they were showing off and just used one hand. He taught me to hustle when running the bases and shagging balls, to keep our eye on the ball and if I missed a shot to relax and hang in there and try again.

Dad also played on a lot of teams with his kids when they were older. He was well known as someone who would recruit good ball players. He loved to hunt and fish. If it was hunting season he would always be out on opening day for deer, elk, antelope and occasionally mtn goats.

He loved people and was always a loyal friend. He would always check in with his old friends from years ago if he had their phone number  Most likely beginning each conversation with What’s new. He wouldn’t always remember names and most people got used to being called handsome, slick, doll or gorgeous.

To watch the service please go to q=https://us02web.zoom.us/j/86775390815?pwd%3DS2VGMUNWYzJBMUpaNHkwM1lRYVlRdz09&sa=D&source=calendar&usd=2&usg=AOvVaw1IJXQmYpEvAMPOr-xxZRYw

A visitation will be held on Friday, February 4, 2022 from 5:00 – 7:00 pm.  A funeral service will be held on Saturday, February 5, 2022 at 9:30 am with a visitation held one hour prior to the service at the The Church of Jesus Christ of Latter-day Saints located at 701 Curtis Road Boise, Idaho.  Condolences may be left for the family at www.bowmanfuneral.com