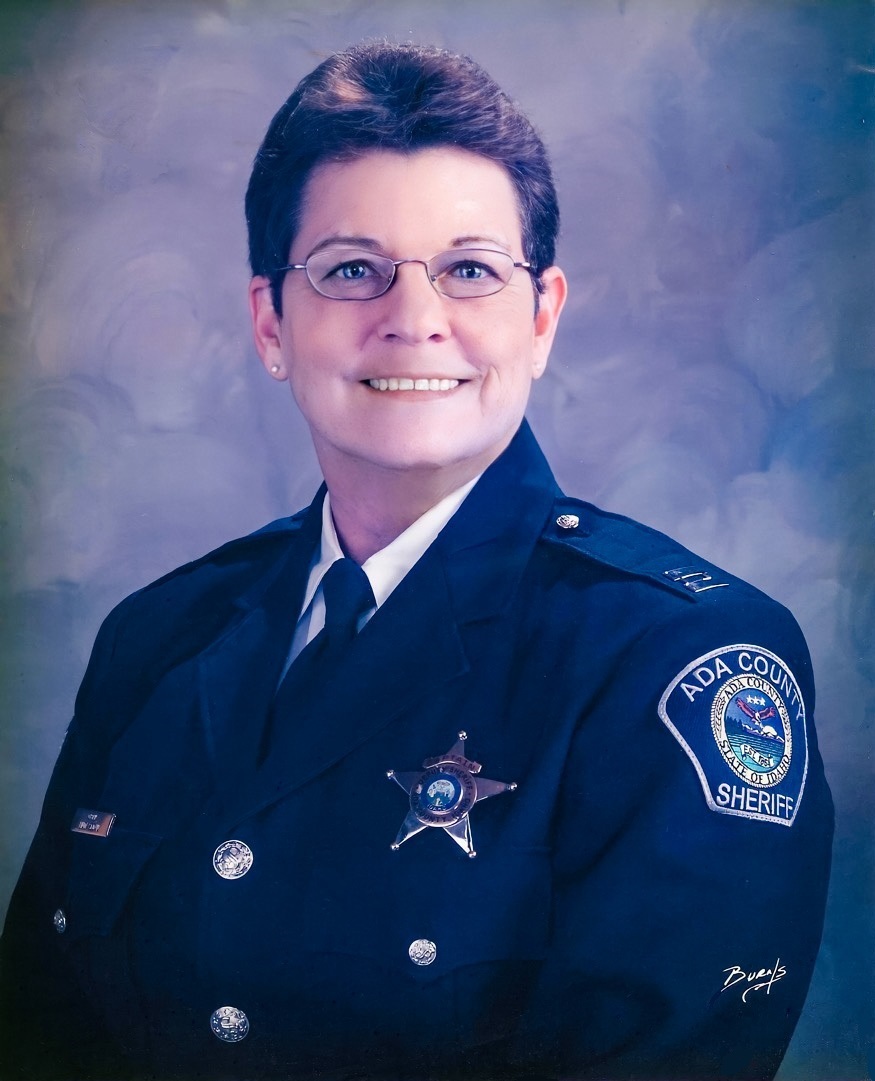 On April 26th Linda Lee Pixley Scown-Haskell, loving mother, grandmother, and our hero passed away at the age of 73 after a long battle with dementia. Linda raised seven kids as a single mother while also working 29 years in law enforcement, becoming the first woman appointed captain of the Ada County Sheriff’s Office. She will be warmly remembered by her family and community as a loving mother, a playful grandmother, a great leader, a trailblazer, a mentor, an advocate and protector of children, and a genuine friend.

Linda was born in Pennsylvania on July 25th, 1948, to William and Dorothy Pixley. She grew up in Reseda California and graduated from Reseda High School.  Linda married in 1969 and in 1975, moved to Boise, Idaho, a community she loved and served for the rest of her life.

Beginning in 1982, with seven children ranging from the ages of one to twelve, life circumstances placed Linda in the position of raising her young family as a single mom. Linda sacrificed and gave everything for her children, loving them unconditionally. She sacrificed without hesitation for her family, often working more than one job and all the overtime she could to make ends meet. Her example taught her kids how to work hard, be responsible, and contribute to their community. A favorite saying was, “Do it right the first time, I don’t have time to tell you again.” Because she loved her children, she held them accountable and expected them to always do their best. Her seven children, and 23 grandchildren, will encircle her in love forever.

In 1983, with the encouragement of a Boise City police officer who was a close family friend, Linda began her career at the Ada County Sheriff’s Office, where she worked for 29 years. She started work as a jail deputy and quickly discovered a talent for law enforcement. Her keen instinct, ability to understand human behavior, and empathy allowed her to connect with people in need while building trust with her many colleagues in law enforcement. Through her hard work, talent, and commitment, Linda was promoted throughout her career, from the jail, to patrol, then detective, detective sergeant, and lieutenant. In 2008, she became the first female captain in the 150+ year history of the Ada County Sheriff’s Office. She served as captain for 5 years, before retiring from the Sheriff’s Office in 2013.

Linda was especially passionate about doing what she could to keep the children of Ada County safe. Linda spent much of her career as a detective specializing in investigating and preventing crimes against children. She was a passionate and skilled detective. Her hard work as an investigator and interrogator kept bad people off the streets, making Ada County a safer place for children. She was broadly admired by her peers and within her community, and proudly represented the Ada County Sherriff’s badge she wore for 29 years.

Linda’s life circumstances were not easy, but she never once asked, “Why me?” Regardless of how difficult the circumstance, Linda could be counted on to put her head down and go to work. Linda would say that her challenging life circumstances shaped who she became, and she would not have it any other way. She felt abundantly blessed, and actively looked for ways to pay that forward, whether by tipping extra at a restaurant, helping out a mom down on her luck, or taking the time to help a stranger in need.

After retiring as captain of the Ada County’ Sherriff’s Office, Linda married Eugene Haskell. Shortly after, in 2015, Linda was diagnosed with dementia. Over the last few years, dementia slowly eroded Linda’s own memory. And so we now carry her memory with us. We remember her love for her family. We remember her hard work and sacrifice as a single mom. We remember how she made a difference in her community during 29 years in law enforcement. We remember her life of service, compassion, generosity, and love.

She is preceded in death by her parents William and Dorothy Pixley, her brother Bruce Pixley and her sister Mildred Pixley George.