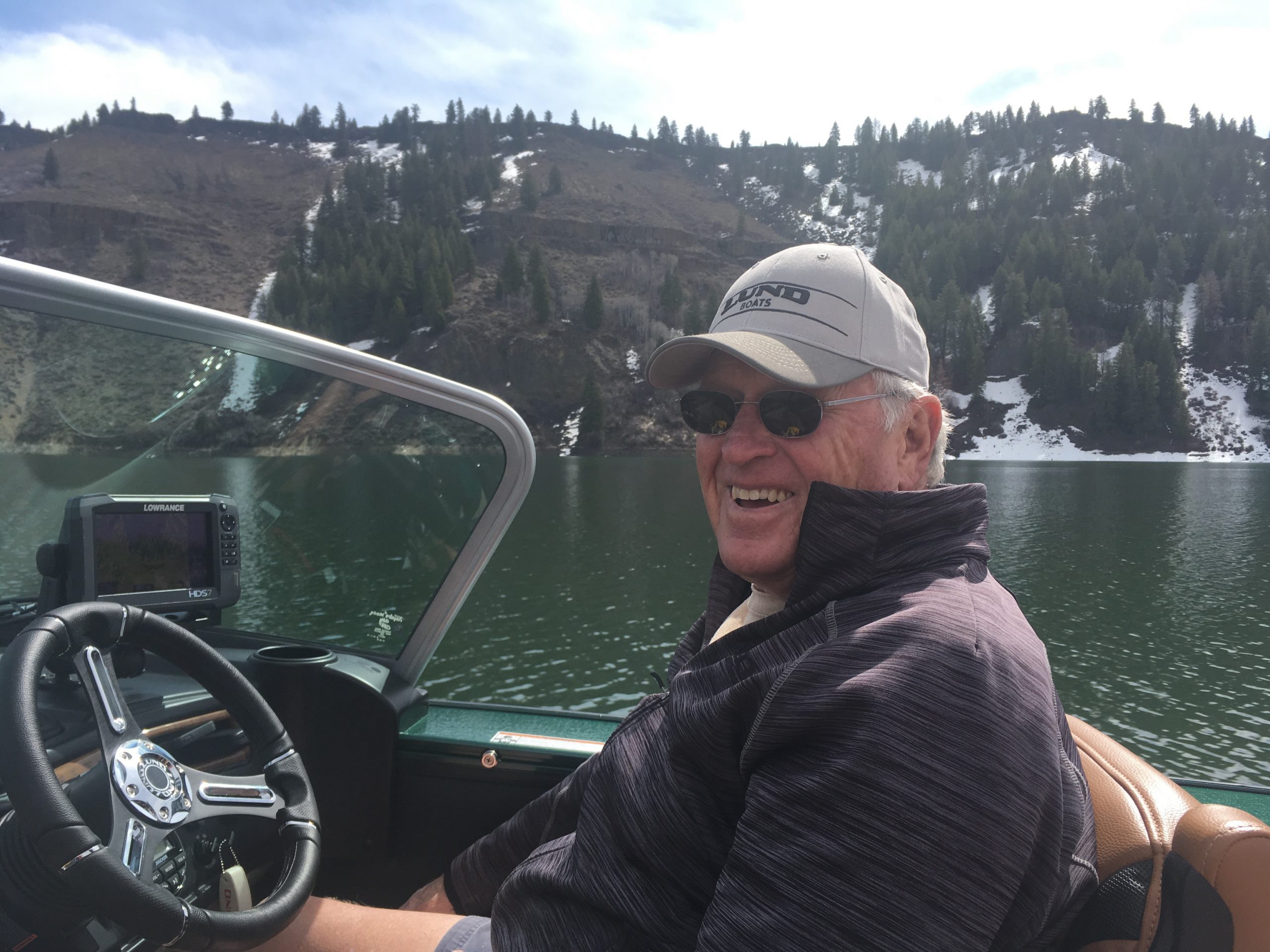 Lew Stiner passed away December 14th, 2021 in Boise, Idaho surrounded by family. He was born February 12th, 1944 in Hastings, Nebraska to Lamoine and Josephine Stiner. The family moved to Grand Island, Nebraska shortly after his little sister was born.  After graduation from Grand Island High School, Lew attended the University of Nebraska at Lincoln. Following school, Lew served in the Nebraska National Guard and continued after his discharge in the Guard Reserves.

While living in Denver and working for General Motors, he met and married Carol Pifari and later moved to Boise, Idaho. They had two children, Eric and Jamie.  Lew loved Boise and bought Capital Sports Sales, which he owned for the next 42 years.  He played a key role in organizing the annual Treasure Valley Boat Show for many years.   The boat store slogan “Our Boats Run On Water – Ding! Ding!”  is still a favorite family memory.  In 1996, he married Dona Parker and gained three more daughters.

Lew loved the water and spent many happy hours fishing and boating on various Idaho lakes and reservoirs.  He loved to travel, making frequent trips to Mexico and the San Juan Islands in Washington state. In his retirement, you could find him cruising around town in his 1929 Chevy sedan or his 1950 Chevy pickup which he refurbished into a jazzy red street hotrod. He enjoyed his motor home and he and Dona drove it all over the Western U.S.  Of all things Lew loved most, the greatest was getting family and friends together for trips, showing them his favorite spots and his favorite ways to enjoy life. It usually involved some sunshine, a nice piece of meat or fish, a two olive martini and a dash of troublemaking. Forever a dealmaker, his wide smile and blue eyes could charm most everyone he met.

Lew is survived by his wife Dona, son Eric (Christe) of Orange County, California, daughter Jamie of Dallas, Texas, stepdaughters Tiffany Roberts (Carrie) of St George, Utah, Tana Campbell and Toni Parker of Boise, his grandchildren Madeline, Logan, Ashlynne and Brighton, stepgrandchildren Bryce, Bentley, Natasha, Kennedy and Titan, his sister Carol Jo Richter (Rick), plus three nieces and one nephew. He is preceded in death by his parents. Lew loved his family more than anything else in his life and always tried to include them in his great adventures.

In accordance with Lew’s wishes, the family is planning a celebration of his life in the Spring of 2022.

In lieu of flowers, the family suggests contributions be made in Lew’s honor to the Idaho Coast Guard Auxiliary.

In accordance with Lew's wishes, the family is planning a celebration of his life in the Spring of 2022.