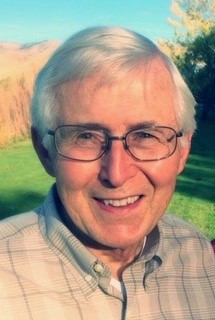 After courageously battling an aggressive prostate cancer for six years, Lee passed away April 13th, 2020 with his family by his side.

After graduating from Garretson High school, Lee joined the South Dakota National Guard, where he served 6 months of active duty and five and a half years of reserve duty.

Lee met Nancy Haglund while working towards his pharmaceutical degree at South Dakota State University in Brookings, SD. She was in the nursing program. Best friends and inseparable since 1965, they would have celebrated their 55th anniversary in November 2020. After college life, they had two children: Liz Otterness (and her husband David Ballance) and Andrew (and his husband Italo Leveratto). In later years, Lee’s life was full, keeping up with his two grandchildren: Everett and Rose.

Lee began his pharmacy career working for Osco Drug in the Chicago area, and through a series of transfers and company buy-outs, he ended his 45-year Rx career with Albertsons in Boise, Idaho. Lee was a long-time member of the Capitol Pharmacy Association in Boise.

Being outdoors was Lee’s primary interest. Whether it be gardening and landscaping at home or camping and fishing in the mountains. After Lee got off work, the family would get in the camper and head for the beautiful Idaho outdoors as often as possible. At some point, the camper became a boat – with the initial thought of fishing. Instead, it became water skiing and dock-camping with a rare fishing trip. After the grandkids came along, Lee was always pulling them and their friends on tubes and other floating devices. How he loved to hear them scream as he spun vicious high-speed circles at Lucky Peak!

Winter months found Lee on the ski slopes with lifetime friends and his family – too many amazing friends to mention by name. In late February for many years, Lee skied with a group of close friends at Big Sky, Montana. His job was to have the coffee ready when the earlier risers were ready to hit the slopes. He and a couple of others were not “first” trackers! Lee continued skiing well into his late seventies when cancer reared its ugly head again.

Another of his favorite things was brewing beer, sometimes wine, sometimes mead. He dabbled with winemaking when we lived in Downers Grove, Illinois, but after moving to Boise it was all about making craft beer. He was an early member of Ida-Quaffer Homebrewers’ Association. His well-documented brew journal was filled with impeccable notes including temperature, humidity, time of day, how long this boiled or that roasted. David is looking forward to using Lee’s detailed notes to brew a batch; Lee’s IPA’s were always a hit with him. Lee created many award-winning brews. Because of his talent and connections in Ida-Quaffer’s, his orange blossom coriander beer was the inspiration for one of the first beers on tap at Table Rock Brewery in Boise. He also acquired pony kegs of microbrew for Liz and David’s wedding; something ahead of its time. The one-and-only batch of undrinkable beer brewed was the one he and Liz made together with unidentified hops from her yard. We called the batch ‘Dason’ and dumped it in the compost; it was truly that bad.

Lee loved to use his woodworking tools to make useful household things and furniture. His most enjoyable projects were with his son, Andrew. Early on, they built a three-story pet condo to care for many generations of rodents and other animals that found their way to our home. Later on, Lee, Andrew, and Italo built several pieces for their home – from a contemporary wine rack to a rustic headboard and tables.

After retiring, Lee and Nancy traveled the world with their special friends. One of his favorite trips was a river boat cruise down the Danube/Main Rivers. But the best place ever may have to be the Otterness family farm outside of Aurland, now a Norwegian Cultural Heritage site.

Lee fully restored a 1968 MG Midget that he acquired from his brother, James. After sitting idle for years in Tucson, it was so full of black widow spiders and other crawly things that he had to let it sit out in the cold Boise winter before he was able to start working on it. Bitten by the restoration bug, he then restored a 1974 MGB GT that came out of a pasture near Ontario, Oregon – it, too, was full of crawly things! And the one he was just starting, a 1971 MG Midget, sits waiting for attention from the family. Lee was pleased to learn that Andrew wants to keep the cars and learn how to maintain them – and maybe even finish the ‘71. Lee became a member of the Idaho British Car Club, participating in drives, car shows, and helping other members with their cars. Lee’s beautifully restored cars allowed him to win several 1st and 2nd places. The club brought him many close friendships. The Car Club also pulled off an amazing drive-by tribute to Lee at the family home just days prior to his passing – thirty classic British cars full of his close friends waving and sending their love from a socially distanced cul-de-sac. This was most certainly a final farewell that sent Lee off with a giant smile.

The family wants to thank the St. Luke’s Cancer Institute’s incredible staff – in particular the doctors and nurses that always had his best interests at heart. We also want to call out our gratitude for St. Luke’s Hospice – especially the superb, compassionate care from Deanna; she took amazing care of all of us.

In lieu of flowers, if you wish, feel free to donate to South Dakota State University’s College of Pharmacy in LeRoy’s name. (https://www.sdstatefoundation.org/give-now)

A celebration of Lee’s life will be held at a future date when hugs and kisses are back in style.