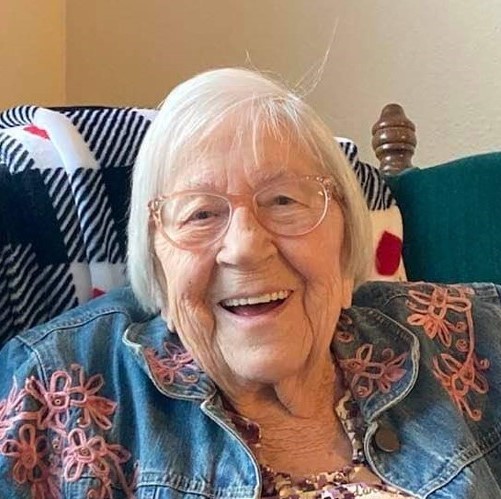 Leora Dilworth Adams was born in Carey, Idaho, on August 5, 1921, to Miriam Howard Dilworth and Joseph Gibbons Dilworth.  She was the seventh of eight children, and the youngest daughter.

When Leora was young, she worked on her parents’ farm in Carey, preferring the boys’ chores to housekeeping.  She was skilled with horses and farm work, drove wagons for harvest, and helped care for stock.  She graduated from Carey High School where she played basketball, participated in drama, and learned to dance. Leora met Grant Adams in August 1940, and they married 11 days later!!

Leora was tough! She was in her early twenties when Grant went to Europe during WWII, leaving her to manage for more than two years, alone with two small children, until he returned at the end of the war. The first home they owned was a military Quonset hut that they moved to Shoshone, Idaho, and trimmed out for their ever-growing family.  In the early fifties, they moved to Boise where they bought a two-bedroom cinderblock house in the North End.  Their seventh child was born while they lived there.  In 1957 they moved to the Collister area until all the children were raised.  Grant worked away from home for many years doing road construction, while she raised the children and worked as a waitress.  She did laundry with a wringer washer and often walked to the grocery store, pulling a little red wagon.  She was fearless and not easily shaken.  She could butcher a chicken or a beef; deliver a calf or a puppy. She could ride a horse, drive a buggy, care for injured animals, and nurse seven sick children at one time. And always, she remained optimistic and full of gratitude for her life.

Leora and Grant loved to dance and were known for their ability to move, as one, around the dance floor. They even waxed the patio to teach their children to dance!  She performed dramatic readings for her children – stories with voices for every character; and she sang musicals.  She also loved to swim, ice skate, camp out with the family, fish, hunt berries, make jams and jellies, grow and can vegetables; and bake breads, cakes and cookies. She taught all of her children to make bread, and several carry on that tradition to this day.  She even made donuts for every party to feed the guests of her teenagers.

She was indeed at her best when she was mothering.  Talented and creative, she made all the Easter dresses, prom dresses, and bridesmaid dresses for her daughters, and she maintained a large collection of fabric remnants to be able to sew on a moment’s notice – dresses, shirts, pajamas, children’s coats, costumes of every kind, doll clothing for endless dolls, and anything and everything else her kids needed.  She once made dolls out of cattails.  She knitted, crocheted, and quilted.  In her nineties she took up beading, and made more necklaces and bracelets for her family and friends than could be counted.

She worked hard, loved unconditionally, and kept every friend she ever made for her entire life. But the true loves of her life were her husband, and her children, grandchildren, great- grandchildren, and great-great-grandchildren, each of whom would swear they were her favorite. No matter how old they got, she remained mama and was always ready to care for each of them, bake cinnamon rolls;  cook their meals – anything to help them recover from whatever ailed them, whether they were 4 or 40, 6 or 60.  She defended and supported her children in all things; cheered them the loudest in the gym or concert but was often the one to enforce the rules.  She had a saying for everything and a playful sense of humor.  Her love of music, dancing, and swimming carried her into the last years of her life. There was little she did not do in her one hundred years.

She was a most remarkable woman.

She and Grant moved to Meridian after they retired and in 2014 she moved to Morningstar Retirement Living in Boise. She passed from this earth on Monday, March, 28th, 2022 at the age of 100 years and nearly 8 months.  She was preceded in death by her parents, her four brothers (Marold, Stanley, Orvis and Melvin Dilworth) and three sisters, Vida Thompson, Leah Nielson and Emily Bell), and all of their beloved spouses. Also preceding her to Heaven were her husband, her two eldest sons and daughter-in law Barbara and (her hardest loss in this life) her grandson, Ben.  She is survived by her remaining five children, 151 grandchildren, great-grandchildren and great-great-grandchildren; dozens of nieces and nephews and their children, grandchildren and great-grandchildren.

Our mother, grandmother, and great-grandmother is truly irreplaceable – the last of her generation, the matriarch of this family – and she will be missed forever by us all.  Her desire for us was that none would grieve for her. Instead, she wanted us to celebrate her life and her joy at returning to her Father in Heaven where she would reunite with those she loved who left this life before her.

Her Burial, next to her husband Grant, will follow at Meridian Cemetery 895 East Franklin Road, Meridian, Idaho 83642.