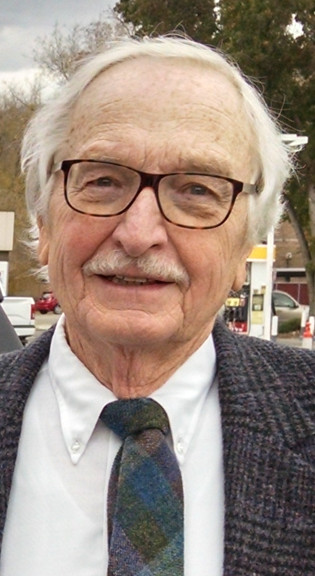 Lawrence (Larry) Joseph Harrison was born into his eternal life on November 7, 2020, taken by pancreatic cancer. His story began just shy of 87 years earlier, on December 11, 1933, when Larry was born to Bud and Eileen Harrison in LaPorte, Indiana, joining his two brothers Bill and Steve. He became a child of God through baptism on December 31, 1933 at St. Peter’s Catholic Church in LaPorte. The family gained a little sister when Mary was born a few years after Larry.

Larry followed his brother Steve to Notre Dame University as an engineering student. When asked why he chose that field he said, “because that’s the registration line Steve was standing in.” He received his degree in Chemical Engineering from Notre Dame in 1955.

Following graduation from Notre Dame, Larry enrolled in graduate school at Purdue University because they offered one course in Nuclear Engineering, and Larry had decided that this was the field of engineering he wanted to pursue. While at Purdue he met the first love of his life, a beautiful petite coed named Nancy Lamoreaux. Larry earned his master’s degree in chemical engineering and Nancy her bachelor’s degree in microbiology in 1957.

Larry and Nancy tied the knot in Indianapolis on May 4, 1957. Shortly after, they packed up and moved ‘out west’ to the wilds of Idaho where Larry had accepted a nuclear engineering position with Phillips Petroleum Co. at the Idaho National Laboratory. They settled in Idaho Falls and over the next twelve years their family grew. Kathy, Elaine, Dan, Tim, and Julianne came in quick succession. Cara waited another 6 ½ years before making her grand appearance.

After six years at Phillips, Larry moved to Argonne National Laboratory’s Western Laboratory at the INL. Most of his thirty-two years at Argonne West were spent working with the TREAT (Transient Reactor Test Facility) reactor. While working there he also found time to obtain his master’s in business administration from the University of Idaho in 1970. Larry had the opportunity, after 20 years in retirement (both he and the TREAT reactor), to go back to work to help restart this one-of-a-kind facility for new research on nuclear reactor fuels.

When Larry wasn’t at work ‘out on the desert’ he would often be found at Holy Rosary Catholic Church. By the time Larry moved from Idaho Falls to Boise in 2017 there were not many volunteer positions at Holy Rosary that Larry hadn’t filled during his sixty years there.

Besides his work and church, bridge was the third passion of Larry’s. He and Nancy spent many happy years playing with ‘the Dinner Bridge group.’ He was also able to play bridge on the INL bus to and from Argonne using a special table the engineers built just for the bus.

In September of 1995 Larry lost his beloved Nancy to cancer.

In March of 1996 Larry and Barbara Condon, the Evangelical Lutheran Church in America (ELCA) pastor in Idaho Falls, started conversing which led to a relationship between this cradle Catholic and Lutheran pastor. Eyebrows went up and tongues wagged all around town when news that they were dating got out. Larry and Barbara were married in May 1998, beginning a new chapter of Larry’s life. He and Barbara moved to a new house on a half-acre lot that Larry turned into a beautiful park with his gardening skills. What had once been a passion for his work now became a passion for his yard. His gardening artistry continued in their new smaller yard in Boise as he transformed it too into a beautiful garden. He came to enjoy living in Boise and loved that he was able to see his children and grandchildren more frequently.

Larry was a man who never seemed his chronological age. He was a phenomenal bridge player, a lover of classical music, and a collector of works by local artists. If you ever thought of him as a stuffy engineer then you never saw him in his famous cow suit, or Birthday Boy Christmas sweater, or with his pink hair from playing Holi in India or dressed as a Kalakathi dancer. Larry was known for his love of sweaters and passed many of his favorites on to his family. He grew into being a staunch supporter of the LGBTQ community in Idaho Falls and beyond. He had a heart the size of Texas and was generous to a fault. He laughed and cried at the drop of a hat. His love of God and love of being at daily and Sunday mass was as deep as the ocean. He wasn’t afraid of death when it suddenly knocked on his door. Throughout the years, when the subject of death would come up, Larry would always quote Timothy Leary who had said that “death would be the ultimate trip.”

Larry was preceded in death by his parents, his wife Nancy, and their son Dan.

He is survived by his wife Barbara; his children Kathleen (Jim) Batdorf of Richland, WA,