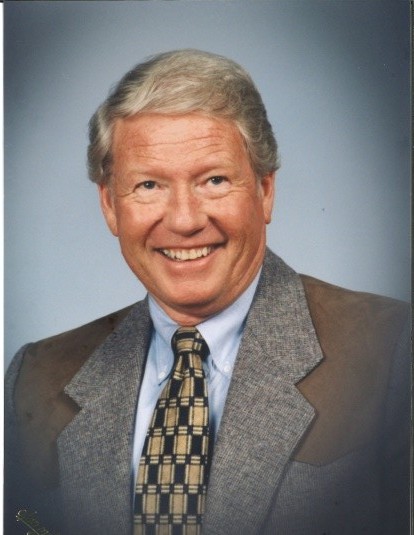 On January 5, 1955 Jerry married the love of his life, Leona Rae Morris. They were blessed with two sons, Steve and Daniel. He proudly served two years in the Army where he was deployed to Korea. Upon discharge, Jerry moved to Pocatello. He graduated from Idaho State University with a business degree and spent the majority of his working life in transportation leadership positions – Garrett Freightlines (26 years) and the Pocatello School District (10 years). He thoroughly enjoyed the people he worked with.

Jerry was actively involved in his son’s lives. He coached them in baseball and also served as a Scout leader. He was proud that his sons both achieved the rank of Eagle Scout. Jerry also was a passionate cheerleader for his grandchildren – he was a fixture in the stands at their sporting events.

The First Presbyterian Church was the heart of Jerry and Leona’s life. He served many terms as a Deacon, Elder and held many other important leadership roles. Jerry was deeply religious – committed to helping others, providing assistance and care to those in need. He was an active community volunteer – the Salvation Army, Idaho Food Bank, and Habitat for Humanity where he worked with a group of Church members to build new homes for people who needed a helping hand.

For the past 50 years, Jerry and Leona embarked on the annual ‘Oregon Coast adventure’. Jerry treasured this time with his family. Jerry and Leona also loved to travel. In retirement they ‘cruised’ the world with their closest friends.

Jerry is survived by his wife, Leona, sons Steve (Pam), Daniel (Amy) and four grandchildren, Katelyn, Mitchell, Madeline and Naomi. He is also survived by numerous nieces and nephews. Jerry was preceded in death by his parents and siblings, Joy Robinson and Joe Skaggs.

Funeral services will be held 11:00 am, August 3, 2019 at the Buhl Presbyterian Church. Burial will follow at the West End Cemetery in Buhl. Arrangements are under the direction of Bowman Funeral Home, Garden City. The family suggests contributions be made to Gateway Habitat for Humanity or the First Presbyterian Church Camp Scholarship Fund.