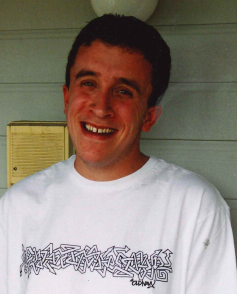 On July 9, 1980, an amazing human being came into this world before he should have.  He became a full-time resident of the NICU at St. Luke’s Regional Medical Center and stayed there until early October, 1980.  Kurt never realized how strong he was and what effort it took to survive his first months.

Kurt lived in Boise from his birth to January 1987 when he moved to Redmond, WA.  This is where he began lifelong love of the Seattle Seahawks.  He remained in Redmond until June 1990 when he returned to Boise, ID.  He lived in West Boise for the remainder of his life.

In August, 1996, Kurt began his career at Albertsons on Ustick and Five Mile.  He continued there until his death.  He was named “Most Valued Employee August 1998”.

What was more important to Kurt was the respect and friendship he gained from colleagues and customers at the store.

Kurt was part of the 12th Man for the Seattle Seahawks.  Loud and proud.  He was a fan of the BSU Broncos.  He loved cars and Miniature Schnauzers.  He was a big fan 100.3 The X calling often with song requests of ‘90’s rock music.

In lieu of flowers, please make donations to: