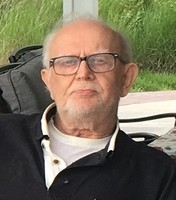 On December 21, Dean Holt passed away after a brief illness.

Born in Council, ID, Dean moved with his family to the rugged, redwood lined coast of northern CA in 1954. He graduated McKinleyville High School in 1964, attended College of the Redwoods and worked for Simpson Timber Company for over 20 years. In 1994, he returned to Idaho and drove trucks for Idaho Concrete Co. until his retirement in 2006.

At the age of 29, Dean proved his fierce determination and resilience when he battled back from a spinal cord injury suffered in a devastating car accident on a hunting trip. Left partially paralyzed, he refused to accept the dim prognosis of being confined to a wheelchair and tirelessly worked with physical therapists to regain most of his capabilities. Against all odds, he soon walked with the assistance of only a leg brace, and continued to live life on his terms, as a lumber grader, truck driver, avid outdoorsman, sports fan, and in his most meaningful role, proud and loving father to his children.

Even while working and raising his family in Humboldt County, CA, Dean lived with one foot in Idaho. His childhood summers were spent at his grandparents’ home in Riggins and that tradition continued after he married and had children of his own. He loved wildlife and the outdoors. His favorite times were spent in nature with family and lifelong friends–camping, boating, deer hunting, and trout fishing. His infectious joy of cheering for the San Francisco Giants, 49ers, BSU Broncos and Boise Hawks was passed on to his children and grandchildren.

The family would like to thank the staff of The Cottages of Boise for their exceptionally attentive care in Dean’s final months. A memorial service will be held near Dean’s early childhood home of Donnelly at a later date when it is safe to gather.

The family would like to thank the staff of The Cottages of Boise for their exceptionally attentive care in Dean's final months. A memorial service will be held near Dean's early childhood home of Donnelly at a later date when it is safe to gather.