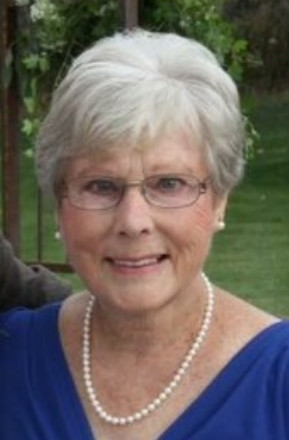 After a peaceful day surrounded by family, Elaine Wolfe died on October 8, 2022 as a result of a multi-year struggle with dementia. Elaine was born on August 4, 1935 in Dietrich, Idaho. She was the only daughter and second of six children born to Jack and Katie Ward. Elaine graduated from Dietrich High School in 1953 and returned many times for their annual reunions. She married Robert F. (Bob) Jones at 18 and they had three children in a little over three years, Rory, Scott, and Jill. Bob died in a car accident on a family vacation in 1964.

Elaine then attended Boise State College to become a teacher. She also received her MA in Curriculum and Development from BSU in 1984. Through mutual friends she began dating G. William (Bill) Wolfe, a man who had three daughters in less time than Elaine had managed – Anna, Kaye, and Patti. Under false pretenses, and after leaving their six kids with a neighbor, they eloped to Elko on Christmas Eve 1966. Now our combined family of eight moved to a bigger house on Randolph Dr. next to the Kallenbergers, who became our extended family.

Elaine started her career teaching at West Junior High and finished it at Borah High School. She taught English in the classroom and at home and also supervised the Borah Senator, the school newspaper. She formed collegial and lifetime friendships which she held dear the rest of her life. She also maintained an open and loving household; her children’s friends, many of whom called her their second favorite mom, were always welcome for a warm meal or an overnight stay. Friday nights would find kids from all over the neighborhood playing Kick-the-Can at the Wolfe household and eating delicious homemade desserts afterwards.

Elaine and Bill loved to travel. After Bill died in 1996, Elaine continued that passion as a world adventurer; whether it was trips to explore NYC and the east coast with her daughters, DC and Thailand with her grandchildren, San Francisco and Seattle with Anna for art exhibits and high tea, or overseas with family members and friends, Elaine loved to go! While teaching in Thailand for three years she toured countries and visited new and old friends all over the world. By the time she finished her travels she had explored 64 countries and six of the seven continents. Not bad for a girl from the small town of Dietrich, Idaho!

Elaine was always a person of faith. She was raised in the LDS faith, married a Presbyterian, and they became Congregationalists.When they combined their families Bill and Elaine alternated between Congregational Church and the Catholic Church before settling in as Congregationalists. Late in life she joined her dear friend Pat attending the Methodist Church.  Somehow remaining unconfused by all of that, Elaine believed that she would be reunited with her loved ones and had strong faith in God.

Survivors include: Rory and sons Riley and Garrett; Anna and son Rich; Jill, husband George and children Nicole, Nathan, and Monica; Kaye; Patti, husband John and daughters Laura and Annie. Elaine also had 4 great grandchildren. Elaine was preceded in death by her husbands Bob Jones and Bill Wolfe, her parents Katie and Jack Ward, her son Scott, and her brothers, the Ward boys, Jack, Stan, Keith, Gene, and Gale, her daughter-in-law Lisa and son-in-law Dave.

Special thanks to Kevin, Kate, and the wonderful care providers at The Grove and Doctor’s Hospice of Idaho. Your support and caring on behalf of our mom meant the world to us.

To view the Celebration of Life service please click the following link.  https://view.oneroomstreaming.com/authorise.php?k=1665625182213174

To watch the tribute video played at the service  click the following link https://www.tributeslides.com/tributes/show/GW5W42SL7BKDK59Q

To watch the tribute video played at the reception click the following link https://www.tributeslides.com/tributes/show/872FYS4RPNYRGBTM