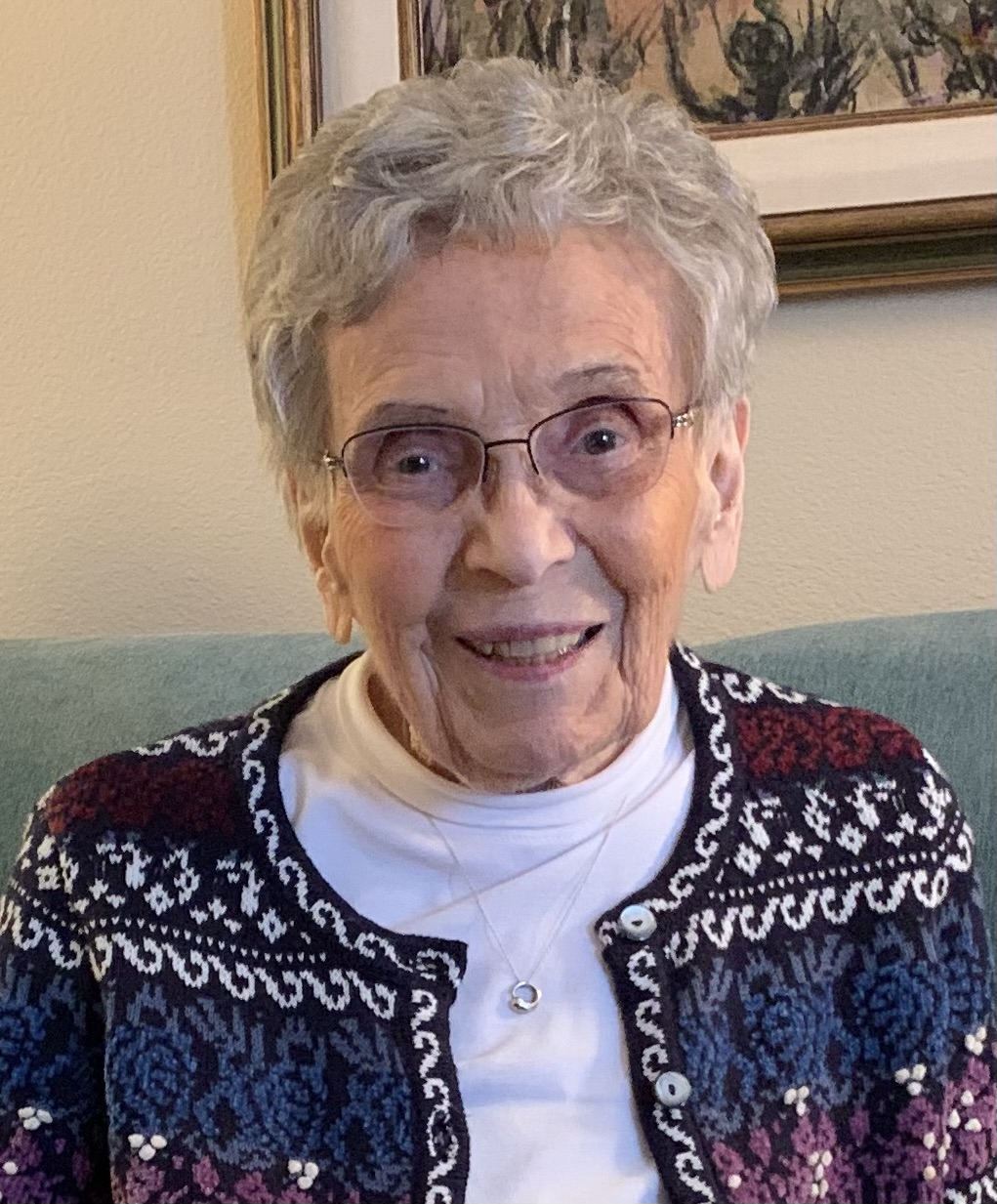 Josephine Miller (100) passed away on June 11, 2022, after a brief illness that allowed sufficient time for her five children and many grandchildren to attend to her and say their farewells.  She celebrated her 100th birthday on February 2, the second “2-2-22” of her long life.    “Josie” to her friends and “Granny” to her loved ones, she sustained her mental acuity deep into old age and to the very end, taking meticulous care of her hearing aids because she was always energized by conversation and because she knew this was the way to externally manifest that she was vigorously contesting the ravages of age.  Her quiet pride and her gentle dignity were truly her hallmarks and set an example to all who encountered her whether they knew her for a lifetime or were meeting her for the first time.

Josie was born in 1922, in Caldwell, Idaho, the fourth and youngest child of Nicholas and Margaret Ney.   She graduated from Caldwell High School in 1940 and attended Marylhurst College.  In high school, she met Dean Miller, and their love transcended World War 2 and lasted to her last day.  Josie and Dean were married in 1945 and moved to Moscow where Josie supported Dean as he earned a law degree from University of Idaho. In 1949 Josie and Dean returned to Caldwell where they raised their family until his death in 1983.   Josie and Dean sacrificed many personal gratifications to provide for their five children, paying post-secondary education expense of one kind or another for 17 years straight, enabling all their children to achieve advanced graduate degrees.

The length of Josie’s life and resilience are put in perspective when considering that her 100th birthday coincided with the point at which her time after Dean’s death exceeded the 38 plus years of their marriage.  In those 38 years Josie embraced life, having the good fortune to travel with her dear friend Helen Pasley and adventures with her life-long girlfriend Barbara Case Nial in the San Juan Islands.  Josie reveled in her role as “Granny” and soon was known as Granny the Great.  Her grandchildren remark that Granny often knew more about what was going on in their lives than their parents did. Granny was the glue to the family that has grown to nine grandchildren, nine great grandchildren.

Josie was active in the Caldwell community, notably St Mary’s Catholic Church, the Catholic Women’s League, Caldwell Public Schools, and Caldwell Public Library.   She read and stayed informed on many issues and remained anchored to her Catholic faith finding in it the inspiration for her support of numerous human rights issues.

Josie was sustained also by the daily companionship of her sister Margie in Caldwell, and after Margie’s death Josie moved to Boise to be nearer her Boise-based children and grandchildren.  Her cul-de-sac neighbors doted on her, checking in on her and making sure they rushed out to shovel her walk at the slightest skiff of snow, lest they see her outside attempting it herself.  She moved to the Terraces in 2018 where she lived until her death, again enjoying a circle of friends and being revered for her friendly and kind demeanor.

She was preceded in death by her parents, her siblings, Jerry, Eugene and Margaret, her husband Dean and a dear grandchild Kathryn.  She is survived by her loving sons Joe (Celeste), Nick (Cathy Silak), Tom, and Pat (Chris) and her devoted daughter Mary Miller (Jim Acker), nine grandchildren and nine great-grandchildren.

The family expresses its appreciation to Dr. Greg Johnson, Josie’s physician, who marveled at her good health and attitude, and commiserated with her that “her mind was going to outlive her body;” which was prophetically the case.  Also gratitude beyond words to St Luke’s Hospice,  ComforCare Inc,  as well as her caregivers Peggy, Francis, Tammy, Janie and Megan.

Josie’s life will be celebrated at the Mass of Christian Burial, on Friday, June 17, 2022, at 1:00 p.m. at St. John’s Cathedral, 807, North 8th Street, Boise; the Rev. Jerry Funke presiding.  A reception will follow at The Arid Club, 1167 River Street, Boise, from 2:30 to 4:30 pm.  Josie will be laid to rest next to Dean at Canyon Hill Cemetery in Caldwell in a private graveside service at a later date.  Services are under the direction of Bowman Funeral Directors.

The Family invites memorials to be made to Our Lady of the Valley Catholic Church in Caldwell, or to the Wassmuth Center for Human Rights, Boise.

Josie’s life will be celebrated at the Mass of Christian Burial, on Friday, June 17, 2022, at 1:00 p.m. at St. John’s Cathedral, 807, North 8th Street, Boise; the Rev. Jerry Funke presiding.  A reception will follow at The Arid Club, 1167 River Street, Boise, from 2:30 to 4:30 pm.  Josie will be laid to rest next to Dean at Canyon Hill Cemetery in Caldwell in a private graveside service at a later date.  Services are under the direction of Bowman Funeral Directors.